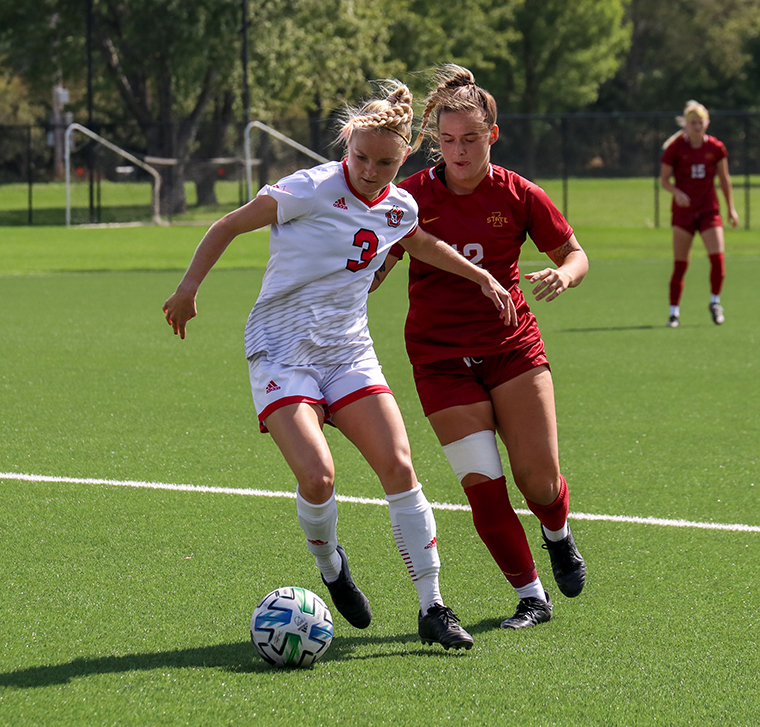 A defensive stalemate in the Summit League Tournament led to a 1-1 tie Thursday between the Coyote soccer team and Denver, the host and top seed in the conference. The tie brought USD and Denver to penalty kicks to decide a winner.

Denver won the penalty kicks 4-2 and advanced to the championship game. The Coyotes fell in the opening round of the conference tournament for the second straight season, but recorded a school Division I best with 10 wins this season.

Neither side scored in the opening half, as the goalkeepers, USD’s Emma Harkleroad and Denver’s Nerea Arrazola, both shut down any shots their way in the half.

The Coyotes were the only team in conference play to force a draw or win against the Pioneers (1-1 draw). The Pioneers broke the scoreless draw in the 54th minute. Sydney Sharp scored her 15th goal of the season with assists from Sami Feller and Natalie Beckman.

Harkleroad faced a flurry of shots in the opening overtime, but didn’t let a shot by. Harkleroad tallied 11 saves in the match.

With neither side scoring in overtime, the match went to penalty kicks, with each side getting five shots. Whoever made the most shots past the keeper and into the goal would win.

Denver outscored USD 4-2 in the shootout and advanced to face South Dakota State in the championship match.

SDSU defeated Denver 4-2 in the championship Saturday, giving the Jackrabbits the conference bid to the NCAA Tournament. The Jackrabbits drew No. 4 Pepperdine in the opening round.

Two Coyotes were named to the All-Tournament team. Joana Zanin and Maddison Sullivan received the honor and SDSU’s Rachel Preston was the Tournament MVP.