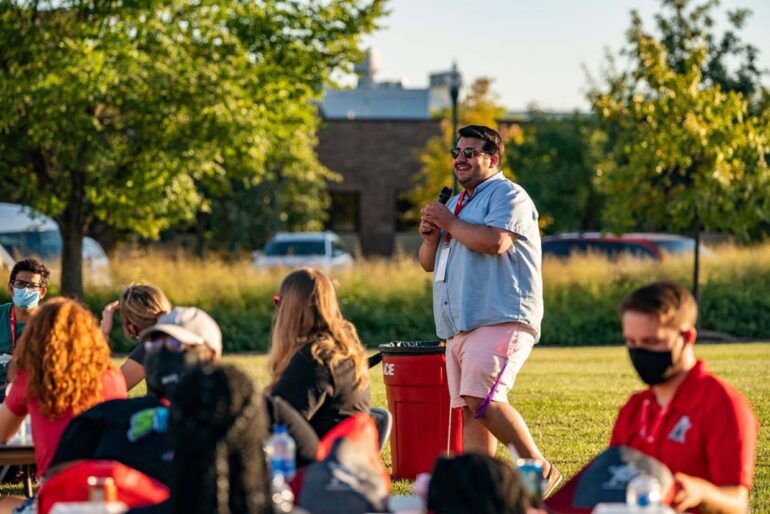 This is the fifth installment of a series recording the experiences of students and faculty involved with the Center for Diversity and Community (CDC). The series seeks to highlight why this organization was so impactful on the USD community and why the CDC was more than the sum of its parts.

“Within two months, three months, I started seeing myself getting more involved in the (CDC) and it was the only place on campus that welcomed me and that I felt like I was seen in some way. I felt like I added some value to the university,” Saeed Dabbour said.

Dabbour started attending USD in 2016. He is from Saudi Arabia and said it was a culture shock when he came to this small town in South Dakota. He said the CDC helped him appreciate his own culture more and get to know who he was.

“It made me realize who I am, you know? I was in the Middle East where the area I lived in I was the majority. Most of the people around me identified as Middle Eastern or Arab. So, coming to the United States made me realize my culture and also made me take pride in who I am and my traditional ways or my traditional aspects or my values,” Dabbour said. “It made me appreciate and take pride in myself and also try to let others know about my pride.”

The CDC was a place for students to share their culture and learn about other cultures. Dabbour said one way he was able to express and share his culture was through an event called Eid al-Adha, a Muslim holiday.

“It’s really a celebration of being around family and creating community. We really showcased it to show how we can connect. We had a lot of henna tables, not that it’s directly related to Eid al-Adha but the fact that it was related to the culture and to the people or something that people would do at (Eid al-Adha),” Dabbour said.

There are many different ways to celebrate Eid al-Adha, so Dabbour wanted the event to show the diversity of ways the event is celebrated across different countries. The event was set up so each table had some way of showing a different aspect of the celebration of the holiday.

“The way I celebrate Eid al-Adha is very different from a Muslim who lives in South Asia or who lives in the United States. So what we did was we showcased how people would celebrate it. Some people would focus on doing henna parties. Some people cook a lot. Some people spend it speaking to family, creating relationships and connecting to family,” Dabbour said. “It was that taste of home for students that felt like, ‘I can’t be with my family right now, what can I do? I need something.’ So I feel like that was an event that offered that support to students.”

Dabbour was very involved with the CDC during his time at USD. It was a space he spent a lot of time at as a student. Not only was Dabbour involved in almost every organization housed under the CDC, but he interned there as a student and he worked there after he graduated.

“So after graduation with my business degree, I thought I was going to go into corporate and then when I was offered this position, I was like, the CDC gave me so much that I want to work back for the CDC and contribute back to students and make students happy. That’s really what it felt like and I enjoyed my job so much,” Dabbour said.

In 2019, the CDC celebrated it’s five year anniversary. Dabbour said he walked into the MUC ballroom and realized he knew everyone on a personal level and there were 180 to 200 people there to celebrate the CDC.

“I went (to make my speech) and I looked around the stage and I was looking at everyone and I was like, ‘Why am I feeling so nervous? I know everyone,’” Dabbour said. “I think what made me nervous, not nervous, but it was more excitement, is what the space really meant to me. In that moment, it made me realize the power the (CDC) had on students. It was during a weekday, people probably had exams and classes, but everyone made sure to take out of their time to come here.”

Dabbour said he feels very privileged to have been at USD while the CDC was still around and the loss of the CDC is a loss to the students.

“What made the space so exciting is it was there for students to empower students. Yes, there was a director and Intercultural Program Coordinator, but it was always driven by what students wanted to see. We never did something students didn’t want to do. You know, that’s the point of a university and specifically we worked in Student Services, which the (CDC) was under, it was there to serve students, it was not there for anyone else,” Dabbour said.

The CDC was a place for all students to be themselves. It was a celebration of culture, diversity and acceptance. Dabbour said in the CDC, he could just be himself.