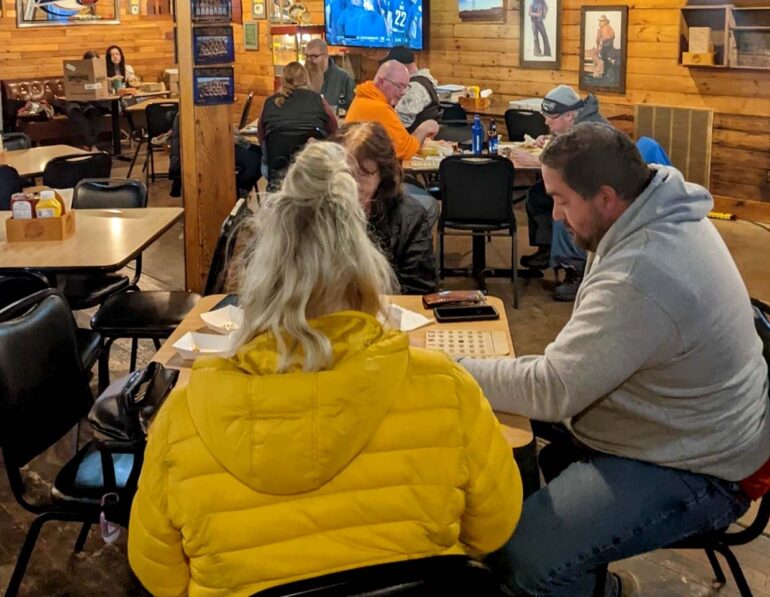 On March 5, Gayville’s local restaurant The Hay Shed hosted “Bingo for a Cause.” The town of Gayville and surrounding towns came together despite the weather to play bingo and raise money for the town.

Paula Marshall, owner of The Hay Shed and organizer of the event, raised around $600 for a firework show to celebrate Gayville’s 150th anniversary.

“It doesn’t matter if you’re eight years old or 80 years old, you can play bingo. It gets people together, it’s quick and easy, it doesn’t take a lot of setup and it’s fun,” Marshall said.

Marshall hosts events like this multiple times a year to raise money for different causes. As the owner of The Hay Shed, she wanted to give back to her community and she said raising money for these causes is what drives her.

“Before COVID-19, I would pick out either a group or organization once a month and then would raise money for it throughout the month. During COVID-19, it took kind of a hiatus,” Marshall said.

One of the most cost-effective ways to raise money was with the bingo games. They can keep 50% of the total money for whatever cause they were donating to. The Hay Shed brought in $20 per game, so each game payout was about $10 according to Marshall.

“We’ve donated money for the choir to buy a new piano, to fight against sex trafficking, to raise money for the new ball fields and one month we raised money for a little boy who had cancer. It’s kind of my way of giving back to the community,” Marshall said.

Marshall also said The Hay Shed has raised money to help the children in the community and to supply them with books for the new school year.

“We raised a little over $400 to buy every child in preschool through fifth grade a book to take home that was their own, gave flashcards, things that the kids at school can really use,” Marshall said.

This month’s money will all go towards the annual town celebration during Fourth of July weekend. As this year will be the 150th anniversary of the town, Marshall wanted to raise more money for the celebration.

“I’m holding our Hometown Hoedown at the same time over the weekend. We’re going to have a band Friday night and a poker run and street dance on Saturday night. During the street dance, we’ll have fireworks to celebrate the Fourth of July and Gayville turning 150 years old,” Marshall said.

Marshall said she enjoys getting to raise money for different causes and being the one to lend a hand when needed.

“We try to help out as much as we can, so we raise money pretty much anytime that somebody needs help. I am more than happy to help out when someone needs it,” Marshall said.