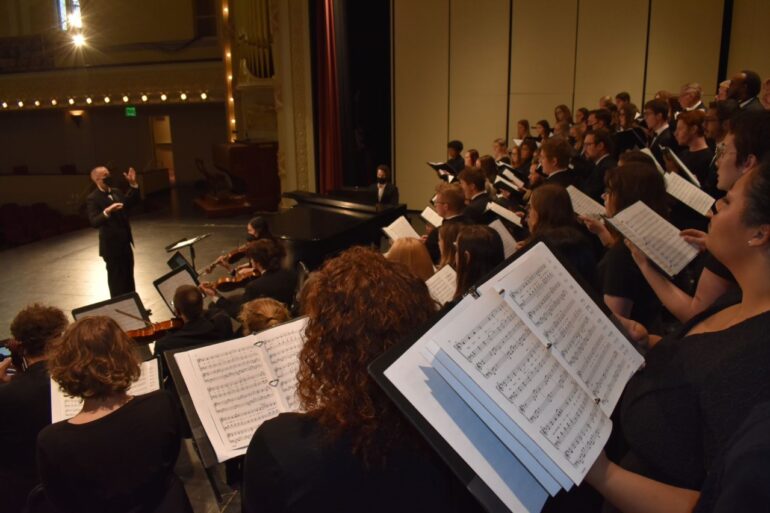 The showcase started with the symphonic choir, which included students from all academic areas and members from the Vermillion community, who performed selected chorales from St. Matthew Passion by J. S. Bach. and was accompanied by Lucus Most.

David Holdhusen, the director of choral activities said that the Collegium Musicum is the newest treble choir for USD and they decided to have this choir as a way to move things in a different direction for the choral department.

“The biggest thing is that we have that treble ensemble now and that is a new thing for us. That’s a really exciting thing that we started this year and kind of moved things in a different direction for the choral department and really trying to give our singers a very varied collection of ensembles to sing in,” Holdhusen said.

The Collegium Musicum performed their last piece which was “For Good” from the Broadway musical Wicked and was arranged by Mac Huff. “For Good,” conducted by Elizabeth Whitehead, included soloists Shaelyn Laferty, Ly Purzol, Morgan Hrivnak and Christina Peterson.

The Chamber singers presented a wide variety of styles by finishing the showcase with seven songs. Some of the songs included were “Hold On” by Remel Derrick, “Lord, Listen to Your Children” arranged by Kenneth Dake with soloist Brian Shirley, “Prayer for a New Day” by Johnathan Reid with soloist Ellie Whitehead and the finale “Signs of the Judgment” arranged by Mark Butler.

“It’s been an amazing experience because of where we were a year ago at this time and not being able to practice necessarily together as a cohesive group and to this year being able to do the things that we used to be able to do has been so inspiring,” Holdhusen said. “I think for the students in the group, they’re connecting more with the music and connecting more with each other and really bringing the whole experience of a concert to life is just something we haven’t been able to do until this fall.”

Holdhusen said the choral showcase was a celebration of the work they have done and the time spent bonding with the music.

“I think for me, it’s a celebration of the work that we’ve done. So we put in all this time, we bonded with this music, we’ve learned this music and now we get to stand up and share it with people and that’s what music is meant to do. It’s meant to be shared with people and just having the opportunity to do that is what I look forward to the most,” Holdhusen said.