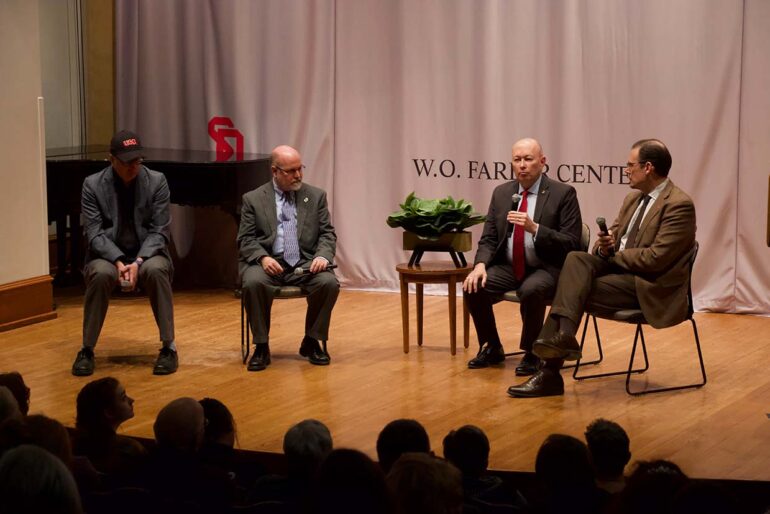 On Feb. 24, Russia invaded Ukraine from the east, west and north. The re-invasion of Ukraine, the first being in 2014 when Russia annexed Crimea, is the most recent action in the war between Russia and Ukraine. Reports of bombings have been reported all over Ukraine and troops have also invaded.

Timothy Schorn, an associate professor of political science and director in the International Studies program at USD, said the outcome for Ukraine seems bleak in facing the Russian military, but Ukraine does have the ability to fight back against Russia.

“Ukraine probably cannot win the war, but they can inflict considerable losses on the Russian army, if not the Russian Air Force. And so…it makes the attempt to seize part of Ukraine more costly for the Russians in personnel, in weaponry and in time it takes to accomplish their goals, in resources to supply the military,” Schorn said. “If the Ukrainians put up the level of fight they are capable of, then we can expect, if not a prolonged contest, certainly a deadly one.”

Oleksandra Lukina is the only Ukrainian undergraduate student attending USD right now and said the war scares her because her family lives in the Ukrainian capital, Kyiv.

“I have a lot of friends from my university in Kyiv, and my parents, right now, they live in Kyiv, in the capital of Ukraine. And I have a lot of relatives there and that’s why I’m worried a lot, because it touches me directly,” Lukina said.

Schorn said the reason Putin went to war and invaded Ukraine was because Putin is seeking to reclaim the countries that were part of the Union of Soviet Socialist Republics (USSR).

“His notion that NATO was a threat is absurd and he knows,” Schorn said. “…But it was a way for him to kind of insert a wedge into American and European public opinion, to make it look like perhaps he was responding legitimately to a perceived threat, but the only people that he was convincing was some of the Western public, he knew that it was false and so did the leaders of the West.”

The United States has put sanctions in place against Russia, but Schorn said sanctions are largely ineffective, especially against Russia, where the system was designed to protect people in power from feeling the effects of sanctions.

“Sanctions are oftentimes feel good tools to say, look, we’re doing something, we are expressing our discontentment and disagreement,” Schorn said. “…The Russians have had since 2014 to create an economy that was as immune as possible to sanctions after the first set were put in place in 2014…Will there be some suffering? Yeah, but Putin is not going to suffer. His oligarchs and kleptocrats aren’t going to suffer.”

Lukina said there are a few things people here can do to help Ukraine. She said finding and sharing reliable information about the war, donating to the Ukrainian military and pressuring national governments to take action is the best way to help Ukraine.

“So we have information, we have donations and we have influence on our governments. That’s what it can do. And support of Ukrainians, that’s what my friends do,” Lukina said.

The Political Science department at USD hosted a panel of speakers on March 1, about the war in Ukraine. Professors Schorn, Eric Jepson, a political science professor specializing in international politics and comparative politics, and David Burrow, professor of history specializing in Russian history, spoke on the panel, with David Ernest moderating the discussion.

The panel discussed topics such as the historical context of the war, NATO’s position, the position of the international community, the risk of a larger war with Russia on the scale of a world war and the response of the United States. A recording of the panel’s discussion is available on the Department of Political Science, Criminal Justice and International Studies Facebook page.