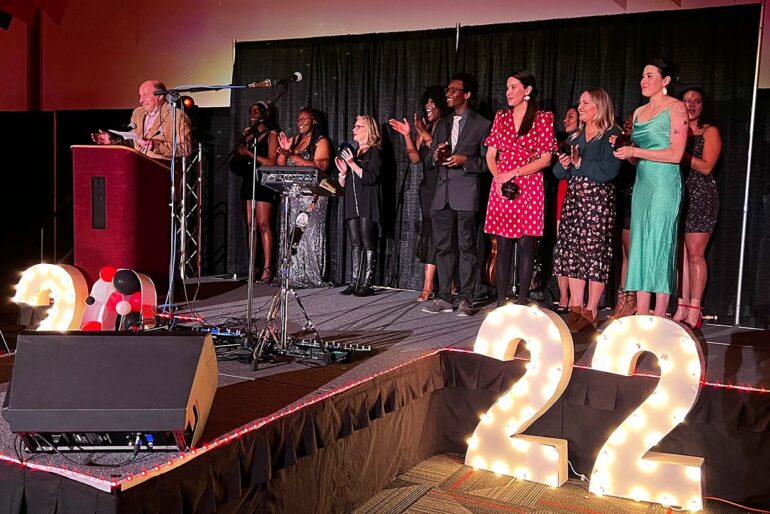 On March 5, the Muenster University Center (MUC) ballroom was filled with music and people attending the fourth annual Ruby Ball. The Union of African American Students (UAAS) hosted the event with help from Campus Activities Board (CAB) and ticket sales went to raise money for Dakotathon.

Ashley Charlie, a senior at USD, is the president of UAAS and said the event is not only a place to have fun, but it is also for a good cause.

“This event originally was put on just as a formal type of environment and excuse to dress up, but it became so much more just because we started to collaborate with Dakotathon. And as everybody knows about campus, that’s one of the biggest (organizations),” Charlie said. “…I feel like the biggest thing honestly, for us, for everybody that’s here, is that they feel like they have involvement in helping the Children’s Hospital.”

During the event, the UAAS gave out UNITY awards. Gabi Luevano, USD freshman and the secretary of the UAAS, said the awards reflect the values of the organization.

“Our (executive) team sat down and we just talked about who we felt embodied those characteristics that we, as the Union of African American Students, try to embody ourselves and just put out into the rest of the campus through our events. We were thinking of people who embody those and immediately these names came to mind and I think it’s really cool. It’s a combination of students and faculty, just the people, anyone in the community of USD,” Luevano said.

Ultimately, Luevano said she hopes people leave the event with a little more of the UAAS values than they came in with.

“I hope that they just feel the welcoming energy and that anyone is welcome and just take away, obviously, we awarded our UNITY awards. And that’s something that…we really value, Uniqueness, (Nobility), Integrity, Tenacity and Youthfulness and we just hope that everyone can walk away with a little bit of that. Whether consciously or subconsciously for tonight,” Luevano said.

Junior Maddison Sullivan was the recipient of the Uniqueness award and said she’s grateful for the award and she loves the Ruby Ball because of the energy and people at the event.

“I just love the people. It’s so powerful being in that room. I don’t feel bad vibes at all when I’m in there. I just feel like there’s so many powerful people around me and I can rely on all of them to lift me up and I just feel so safe in the room,” Sullivan said.

During the event, two local artists, Kobe Jordan and Marcus Destin, performed for the audience. Charlie said she felt like this event showed how students can enjoy their time as long as they are with people who lift them up.

“You know, they say food brings people together. I think with the Ruby Ball and the Union, I feel like it’s the music that brings people together. I feel like especially when you get to college, a lot of people think that you have to drink or participate in a lot of other activities, you know, to kind of fulfill their night,” Charlie said. “I guess that the Ruby Ball is really proof that you really don’t as long as you’re around good people and your friends…I think that’s the most important thing,” Charlie said.

Luevano said the event is an inclusive space for people to enjoy the night.

“For people who feel like sometimes they don’t get these special opportunities to just celebrate and just have fun in an inclusive and welcoming environment. It’s important to create a space for everyone to just relax and have some fun,” Luevano said.

Charlie said she loves being able to provide this fun and meaningful space to people during the Ruby Ball.

“I guess the laughter and just seeing people smile,” Charlie said. “…As cliché as that sounds, I like it because it makes us feel like the night is complete.”