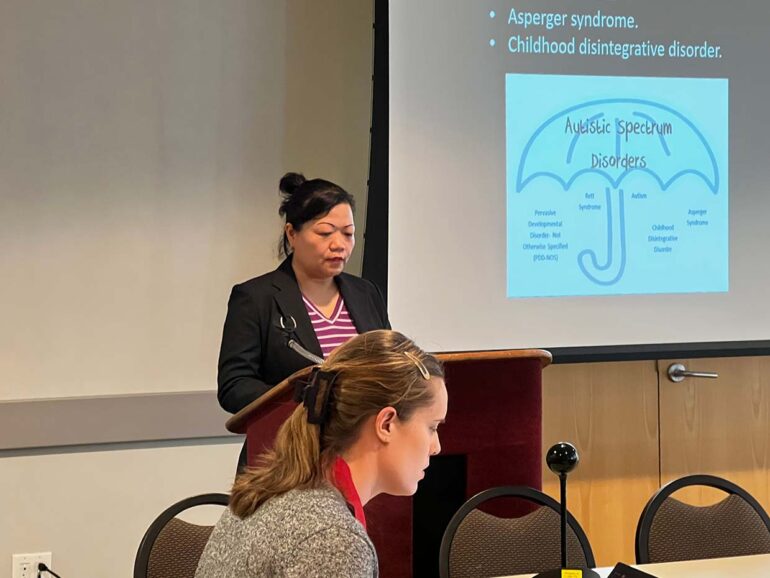 Luye Qin, assistant professor of basic biomedical sciences, who joined the USD faculty in November, hosted a Brown Bag Lunch titled “Autism Spectrum Disorder: What do we know about it?” yesterday.

Qin’s studies over the years have been focused on the neuro-development disorder that maintains autism and has recently expanded into research regarding how children with autism are more susceptible to seizures.

Qin was approached about whether she’d be interested in giving a talk at a Brown Bag Lunch during her orientation in November by Gina O’Connor, a grant specialist for USD and the event organizer for Brown Bag Lunches. Qin said she was eager to present and hoped students would find her talk interesting and would decide to join her lab.

In 2013, Qin began studying the autism disorder, but prior to that, she had to make her way to the United States, Qin said.

“I graduated from the medical school in China, then I began teaching in the medical schools and pursued my Ph.D. I then became an American in 2007,” Qin said. “From 2007 to 2017 roughly, I worked in the Cornell Medical College as a postdoc fellow.”

Qin bounced around a few universities where she continued her studies of autism and how it is affecting people of different ages and in 2019, she began researching autism related epilepsy.

“I’d like to give my career to studying autism…” Qin said. “(Because) the issue is that seizures are the number one cause of premature deaths in autistic children.”

While conducting her research, Qin said she is glad to see the change in how autism is viewed in today’s society.

“Compared to 20 years ago when very few people knew of this disorder (autism), right now it has almost become common,” Qin said.

Even though the world has become more knowledgeable about autism recently, Qin said there is still much to learn. Currently, there is no cure for autism. There is rehab such as behavior therapy that can reduce the symptoms and try to elevate the quality of life but there is no specific cure, Qin said.

Qin said she hopes to be a part of a group who is able to find a way to end the premature deaths of autistic children that are caused by epilepsy induced seizures, and she plans to continue researching this topic and publishing her findings.

May 10th, 2022141
This is the ninth and final installment of a series recording the experiences of students and faculty...

Dispatches from the CDC: A place of comfort and understanding