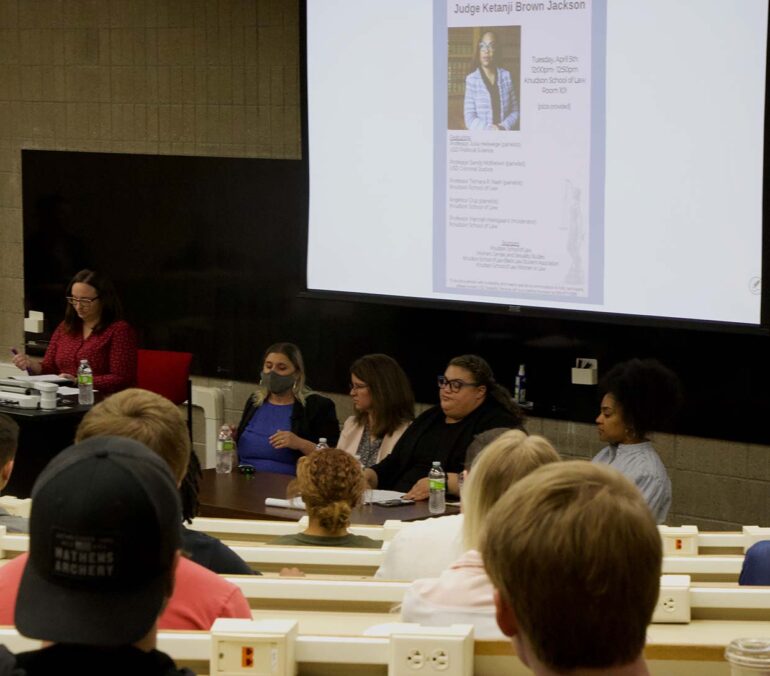 “For me personally, I was a Federal Public Defender before I became dean. She would be the only justice on the court with meaningful experience representing criminal defendants and I think that’s a really important and valuable perspective to have on the court,” Fulton said.

For instance, Fulton believed Cruz was picked because she is a first year student who is entering the law profession as a woman of color and can see Judge Jackson from an interesting perspective.

“Professor Hellwege, as a political science professor and analyst of the American political process, certainly has insight into the current confirmation process and the politics surrounding that. Professor McKeown (is) also a political science professor who focuses on criminal justice and (has) experience as an indigent defender, and Professor Tamara Nash…she is a Black law professor who’s a female and she was the only Black woman practicing law in South Dakota before she came back home to join the faculty,” Fulton said.

In an email interview with The Volante, Hellwege said Haksgaard and Sara Lampert reached out to her and discussed putting together the event. They decided to do a networking effort based on the familiarity of each other’s work to put the panel together.

“This was primarily coordinated by Hannah Haksgaard and Sara Lampert. Lampert serves as the Women, Gender and Sexuality Studies (WGSS) Coordinator and Haksgaard and I are both affiliate faculty who have served on the WGSS curriculum and conference committees. As the nomination hearings were happening right during the WGSS conference, we discussed putting together an event,” Hellwege said.

While introducing the event, Haksgaard discussed why the nomination of Judge Jackson would be historic because she would become the sixth woman and the third African American to serve on the Supreme Court. Haksgaard said this would also be the first time white men would not be the majority of the court.

“Interestingly, at this moment in time, Judge Jackson also brings religious diversity to the court after many decades. The Supreme Court (currently) holds (only) Catholic or Jewish judges and Judge Jackson is a nondenominational Protestant,” Haksgaard said.

McKeown said it was a big deal to put somebody who has been a criminal defender on the Supreme Court because the profession is often misjudged as she felt people will think the problem lies in the question of ‘how can you represent those people?’ She feels as though it implies the attorney is supposed to pick and choose the defendants to represent or the ones they only are supposed to take that they feel morally connected to.

“If they choose to just represent whatever comes in the door, they are somehow morally questionable or they don’t understand the law or they’re not willing to enforce it or maybe it means they somehow took the side of crime,” McKeown said.

Nash said she felt this nomination is important because it shifts the gender balance on the Supreme Court which also provides the perspective of a federal defense attorney to the bench which she felt was much needed.

“The Federal Judicial Center, in 2022, reported that of the 3,852 people who have been confirmed as a federal judge in the United States, only 240 were flagged, and of that, only 71 or 2% were Black women. So we have a pretty big issue with representation,” Nash said.

Dispatches from the CDC: A place of comfort and understanding