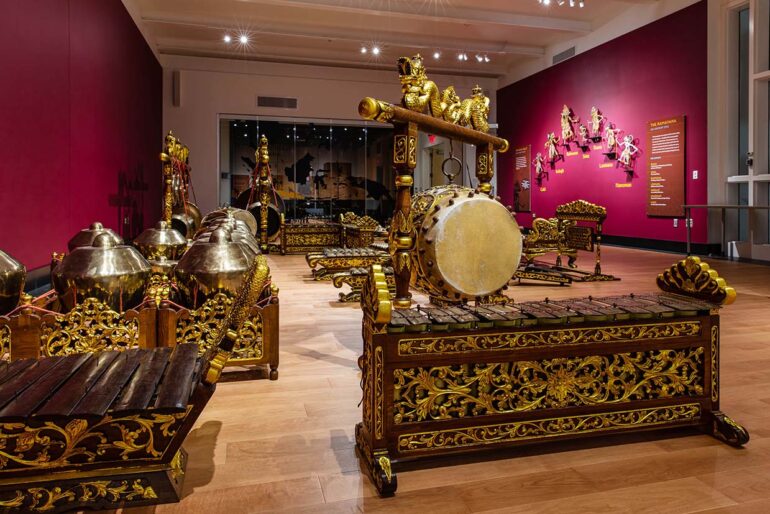 The National Music Museum (NMM) is featuring a new special exhibition called, “Gamelan: A Way of Life.” The exhibition opened March 25 and will be up until October of this year.

Deborah Reeves is the curator of woodwinds and education at the NMM and curated this exhibition. Reeves said the instruments included in the Gamelan were made especially for the museum.

“This exhibition features the museum’s Indonesian percussion orchestra and is a type of percussion ensemble that you find throughout Indonesia and into Malaysia and a lot of those Southeast Asian countries. We are the first owners of it and we acquired the instruments in 1999. They were made specifically for us,” Reeves said.

A Gamelan is a collective group of instruments that individually come together to create a whole orchestra.

“We certainly think the instruments are beautiful, but we’re also asking people to think a little deeper and find associations and  parallels with things in their own lives. And that’s why the title is ‘A Way of Life,’ because in Indonesia, the Gamelan reflects a lot of traditional life there,” Reeves said.

The instruments are made of bronze and wood framework, Reeves said.

“The instruments themselves are spectacular. They’re made out of bronze that’s been highly polished and they rest on wood frames that have real gold leaf trout. They’re just stunning to look at, not as just an object but as art objects,” Reeves said.

The theme of the exhibition is closely tied to what the Gamelan represents, Reeves said. Interconnectedness of everything in life and the nature of how the Gamelan is set up directly relates to each other.

“The interconnectedness in the theme is where we talked about members of one part or different parts that all belong to one entity, and we use the example of the tree and the symbolic Tree of Life, which is very important in Javanese belief as well,” Reeves said. “The Gamelan is even set up to resemble a tree with roots in the back of the ensemble that are played by drums and gongs and then a trunk coming up from the middle that has the instruments that play the main melody, and then the branches, which flower out from there which elaborate on that main melody, and it’s just like a tree.”

Along with interconnectedness, another underlying theme in regards to the exhibition is the duality in life, Reeves said.

“Everything is part of this one cohesive unit. That’s the underlying theme among everything. They were made out of bronze which is a very durable, long lasting material, and that represents permanence,” Reeves said. “The wood, this happens to be teak wood which grows plentifully in the rain forests in Indonesia, which of course decays, but it’s more easily replaceable. So you’ve got this bronze representing permanence and wood representing impermanence. And it’s just again this direct reflection of life, about things that are in our lives.”