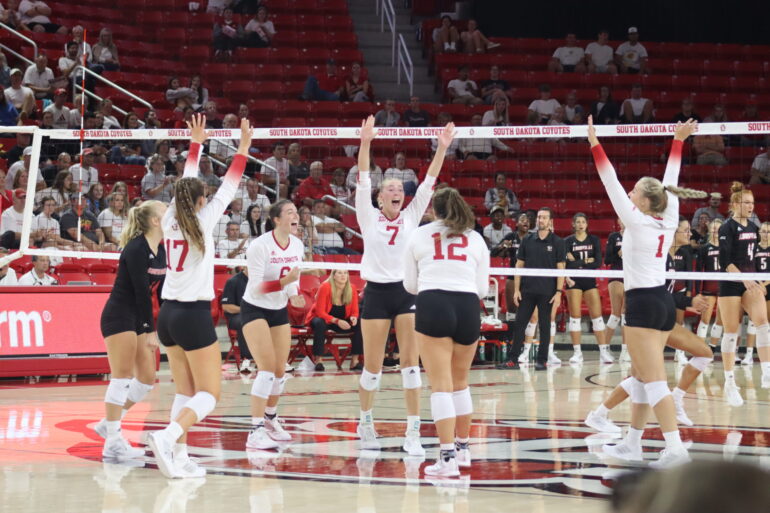 Off of their Summit League Tournament title and an NCAA Tournament appearance, the South Dakota Coyote volleyball team kicked off their 2022 season hosting the Coyote Invitational Aug. 26-28. Bringing in teams such as Missouri, Northern Kentucky and No. 4 Louisville.

South Dakota’s second game on Aug. 27 was against Northern Kentucky who beat South Dakota last season in the Cardinal Classic in Louisville. This time, the Coyotes won, defeating the Norse in three sets (25-23, 25-13, 25-23). Juhnke would again lead the Coyotes in kills with 14.

The final game of the Coyote Classic was against the Missouri Tigers. USD won the first two sets 25-15 and 25-22. The Tigers then won sets three and four 25-16 and 25-21. This took them to set five where the Coyotes won 15-13. Williamson became the winningest coach in USD volleyball history with 165 wins. Juhnke also reached her 1000 career digs.

USD’s next three games will be held in El Paso, Texas for the Borderland Invitational where they will play Portland State, New Mexico and University of Texas El Paso (UTEP).

USD will then head back home to host the South Dakota Classic. They will be hosting California State University Bakersfield (CSUB), West Virginia and Northern Colorado.

The first game will be against CSUB on Sept. 9. USD has only played against the Roadrunners one time in the school’s history.

Game two will also be on Friday against West Virginia. West Virginia made the NCAA tournament last season falling in the first round to Illinois 3-1.

The last game for USD will be against Northern Colorado on Sept. 10 at the Sioux Falls Pentagon. Both teams have a long history of playing each other having 29 total games played between them with the Bears winning 26 of the matches including the last time they met in 2018. Northern Colorado also made the NCAA tournament but fell to Washington State in the first round.

South Dakota will then head south for the Bulls Volleyball Invitational for their final non-conference games. This tournament will have the teams Stetson, Cornell and University of South Florida (USF).

Game one for the Coyotes will be against the Hatters on Sept. 16. The Coyotes won the only matchup in 2012 when they swept Stetson 3-0.

The Coyotes then face Cornell on Sept. 16. The Bears and the Coyotes have never played each other before. The final game of the Bulls Volleyball Invitational will be against USF on Sept. 17.

The Coyotes will then open their 2022 conference schedule by hosting the No. 1 and No. 3 teams according to the Summit League Preseason Poll.

The Omaha Mavericks sit in third position behind the Coyotes in the preseason poll They play each other on Sept. 22 at home. Omaha won the regular season championship with their record of 16-2.

The Denver Pioneers are projected to win the Summit League this season, and will play the Coyotes on the following Saturday at home. These two teams split the series last season with both matches going the full five sets.

After those two games, the Coyotes will go on a four-game away stint as they will play North Dakota State (Sept. 27), in-state rival South Dakota State (Oct. 1), St. Thomas (Oct. 6) and Western Illinois (Oct. 3).

After the four road games, the Coyotes will come back home and play Oral Roberts (Oct. 13) and Kansas City (Oct. 15). The Golden Eagles were one of the three teams to beat South Dakota last season as they split the season series 1-1. South Dakota also took both games against the ‘Roos last season.

South Dakota will then head west to play Denver (Oct. 20) and south to play Omaha (Oct. 22) in their second matchup of the season.

USD comes back to Vermillion to play in-state rival South Dakota State for their second matchup of the year on Oct. 28. The Coyotes defeated the Jackrabbits in all three games they played last year including their final game in the Summit League Tournament semifinals where the match went to five sets.

USD will then head north to Grand Forks to play their first game against North Dakota on Nov. 1. South Dakota swept UND both times they met last season.

Following the game in Grand Forks, the Coyotes will meet once again with Western Illinois (Nov. 3) and St. Thomas (Nov. 5) both in the Sanford Coyote Sports Center.

After the home stand they will travel south to compete against Kansas City (Nov. 10) and Oral Roberts (Nov. 12).

The Coyotes are expected to finish in second place for the Summit League according to the Preseason Polls with a record of 20-10 and a conference record of 15-3.