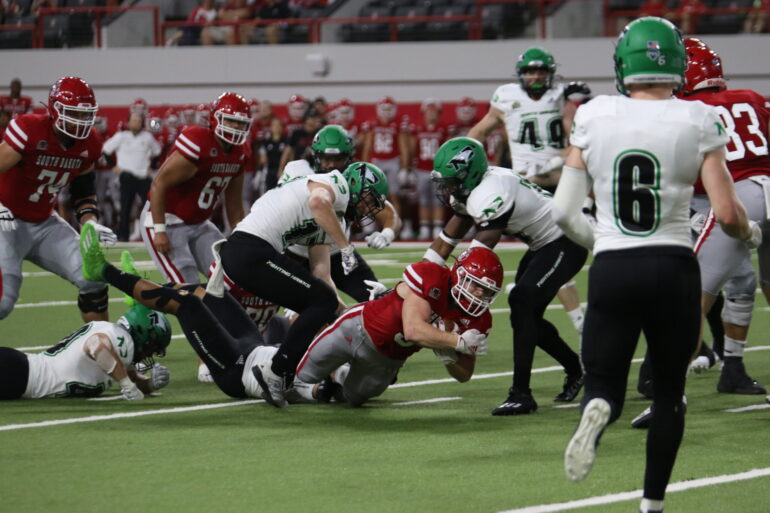 As the Coyotes return to the field after their first playoff appearance, they are up against the toughest schedule in the FCS, taking on a FBS school and the top three teams in the FCS’ preseason polls within their first five games.

Head coach Bob Nielson will be entering his seventh season with the Coyotes. Nielsen’s team will be led by sophomore quarterback Carson Camp for his third season where he will be joined by four returning offensive line starters.

The Coyotes finished fourth in rushing yards per game in the Missouri Valley Football conference last season and their top four rushers are returning.

The receivers saw many transfers and graduates, but last year’s receiving leader sophomore Carter Bell returned as the top pass catcher after ending the season with 672 yards and five touchdowns.

The linebacker core saw three seniors who got significant playing time graduate. The unit will now hand over the keys to sophomore linebackers Brock Mogensen and Tre Thomas.

The secondary remains almost intact, besides the departure of one senior safety, Elijah Reed who received a camp invite to the New York Jets rookie camp.

Special teams will be in a transition year as last year’s starting punter and kicker both graduated. The Coyotes will call on Division III Weaton college transfer senior punter John Bickle who averaged 42.1 yards per punt last season. Senior kicker Eddie Ogamba looks to be the team’s starting kicker after only seeing action in two games last year.

Labor Day weekend is USD’s first game and will be in Manhattan, Kansas for their only FBS opponent this year, Kansas State on Sept. 3. The Wild Cats went 8-5 last year and ended the year with a Taxact Bowl win against LSU. Kansas State is coached by Chris Klieman, who was the head coach at North Dakota State from 2014-2018. As a head coach Klieman is 4-1 against USD.

The Coyotes will stay on the road to play Montana the following weekend. The Grizzlies are picked to finish second in preseason polls after a 10-win season.

Hall of Fame weekend is the home opener for the Coyotes where they’ll play Cal Poly Sept. 17. These two teams faced off last year where USD won 48-14.

The reigning FCS champions, North Dakota State come to Vermillion Sept. 22. NDSU has won nine of the last 11 FCS Championships. The Bison are the preseason favorites to double down in Frisco, Texas.

USD will play its big rival in SDSU on Oct. 8 in Brookings. Last season this game was won by a one second Hail Mary throw by Camp to redshirt freshman wide receiver Jeremiah Webb. The play was later named the Sports Illustrated Play of the Year. The Jack Rabbits are third in preseason polls.

USD will stay on the road as they take on Illinois State ,who defeated the Coyotes inside the Dakota Dome last season.

Dakota Days will be an FCS playoff rematch from last season where Southern Illinois came out on top 22-10.

After their playoff rematch, the Coyotes will travel to Youngstown State. These two last played each other two seasons ago in the COVID-19 shortened season where the Penguins won.

South Dakota will have Military Appreciation Day Nov. 5 where they host Missouri State. Missouri State’s senior quarterback Jason Shelley is on the FCS preseason All-American first team list. Shelley was the Missouri Valleys Newcomer and Player of the Year last season and was a Walter Payton Award Finalist in his first season as a Bear.

North Dakota will be the final road trip for the Coyotes on Nov. 12. UND went 5-6 a year ago but five of the six losses were one score losses to FCS playoff teams.

The regular season finale will be against Northern Iowa. The Coyotes forced three Panther turnovers in their path to a 34-21 victory last season.

The magic number is seven wins to get to the FCS playoff dance. Last year the Coyotes ended the year with the magic number and got in. The Coyotes enter the season just outside the top 25 FCS poll at No. 26 and are picked to finish sixth in the Missouri Valley.