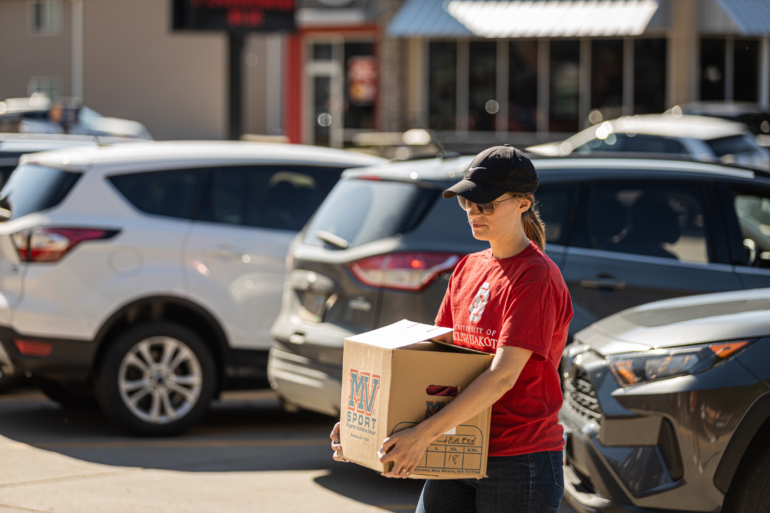 As USD students made their way to Vermillion to begin their studies this fall, some were faced with a unique situation regarding on-campus residency. Due to unexpected factors throughout campus, many students are left living in lounges throughout North Complex and Burgess-Norton residence halls.

Typically used by students to interact with one another and do schoolwork, lounge areas are now closed off to those who were not placed in a traditional dorm. Each lounge is filled with five to six students who have had to make it their “home,” at least temporarily.

Cody Burggraff, M.ED., serves as the university’s interim director of housing. Burggraff referred to the ongoing housing situation as “the perfect storm of three things:” a larger incoming class, an unexpected loss of a residence hall and renovation projects.

“We have a bigger first year class and we lost beds we weren’t expecting [due to renovations], and we couldn’t really go back on our construction plans,” Burggraff said.

USD saw nearly 7,000 undergraduate students enrolled last fall with 34 percent relying on on-campus housing. Scott Pohlson, Vice President of Enrollment, said via email the university can not release any information regarding enrollment numbers for this fall until the South Dakota Board of Regents (SDBOR) makes the official public announcement. This will follow after the tenth day of classes.

With the recent closure of Brookman Hall due to complications with budget and building codes, the university looks to add another parking lot in its place for students to utilize.

Burggraff said the decision to put up another dorm is not in the works at this time as it is a lengthy process that requires action from not only the housing department, but also the university’s President and the SDBOR.

“You have to have a lot of buy-in from the university as a whole and be able to look at the long-term forecast and trends of that nature. It’s millions of dollars to put up a residence hall and you don’t want to be sitting on that if enrollment goes another way. It’s a multiple year process,” Burggraff said.

USD is also working to renovate the four residence halls which make up North Complex in the next few years.

“If students don’t get out of a lounge space before the end of the semester, they’re going to move into a brand new renovated floor for the spring semester,” Burggraff said.

“This is just until their lease becomes available, so we’re hoping to get those lounges opened sooner rather than later,” Burggraff said.

University Housing is utilizing several lounges across North Complex and Burgess-Norton to house students. For one group of lounge occupants, the college move-in experience has been anything but ordinary.

Freshman Michael Demarias, a criminal justice major, lives with four others in a lounge. He had complications with his application being processed late, causing him not being able to live in a traditional dorm right away.

“I was frustrated because there were problems on the university’s end with my application being processed,” Demarias said.

Two of Demarias’ roommates, Raul Ibanez and David Gonzalez, both applied late which also caused them to have to temporarily reside in a lounge.

“I was nervous because there were going to be so many of us in here,” Ibanez said.

The three feel as though the university could improve their communication in regards to upcoming details. They expressed their concerns with not being given a time frame of how long it would be until a traditional dorm was found for each of them.

While a lack of communication was expressed from some, other lounge residents felt confident the university had communicated its intentions well with them.

Roommates Ariam Teclab and Tewobsta Desta share a lounge with three other girls. They said University Housing has been open with them during this time and has offered insight into their next steps.

“They’ve kept us in the loop a lot. There’s a lot of people here and we want our own room, but it’s peaceful here,” Teclab said.

Teclab said housing had given them a two week time frame until they would be out of the lounge. She also said the lounge life had affected her social life because of conflicting schedules and lifestyles among her roommates.

“Sometimes somebody will be here sleeping and we don’t want to disturb them, so we’ll go to a friend’s dorm and stay there for a while. Space wise, you want to be alone in the room, but there’s just so many of us that we have to be cautious,” Teclab said.

Although both lounges had different experiences with University Housing during the process, there is a similar aspect between the two: the unpredicted friendships and connections which have been made along the way.

“I think we were on the lucky side because we got a lot of decent people living in here,” Demarias said.

In case there were to be issues among the roommates in these larger housing situations, University Housing trained its Resident Assistants (RA) on how to handle any disagreements between roommates.

“You have some personalities that might not work together, but you can have that in a double room as well. It’s just in these temporary lounges, there may be more of it. We encourage these residents to go to the RA’s if they do have any issues,” Burggraff said.

While the university has received some concerns from students and parents, University Housing said it is working closely with them to communicate and distribute any upcoming details. More recently, housing has begun to move those who were not placed into dorms into ones where students did not show up.

For students who are continuing to live temporarily in the lounges, Burggraff said they will receive a triple rate. All students were notified of this prior to move-in day.

“We are starting to move them into spaces where students didn’t show up or canceled on move-in day,” Burggraff said. “We haven’t had a lot of [backlash] because there is light at the end of the tunnel, and we’ve treated them pretty good financially.”

University Housing encourages anyone with questions or concerns regarding this process to reach out.

“In the face of progress, there is always a little bit of stress. This is a good problem to have in a way for the university; it means we’re growing in the right direction. For individuals, we do understand that it is a stressful time, and we ask that you work with us,” Burggraff said.