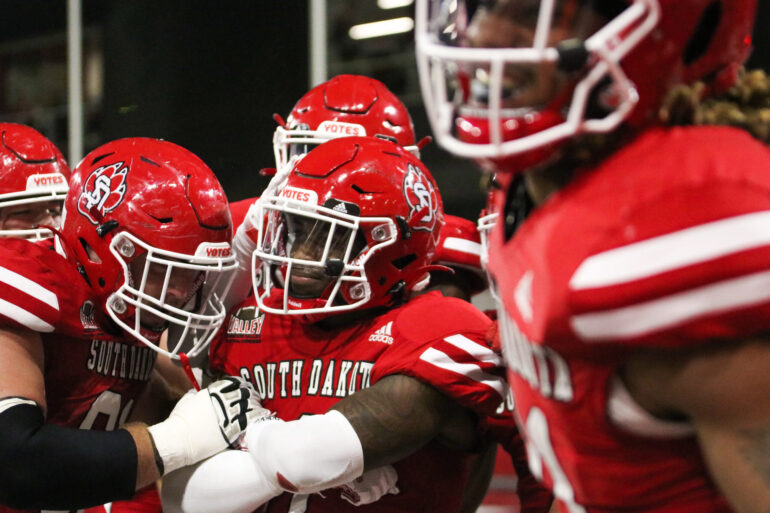 The Coyotes lost to the reigning FCS Champions No. 1 North Dakota State (NDSU) on Sept. 24.

South Dakota entered the contest with a 1-2 record after defeating the Cal Poly Mustangs last week. North Dakota State entered the Dakota Dome with a 2-1 record coming off a loss to the Arizona Wildcats last week.

On their first drive, the Bison started down the field and went for the endzone, but sophomore defensive back Myles Harden intercepted it at the goal line to keep the scoreboard empty.

The Coyotes’ offense went back onto the field following the interception. They were forced to bring out the punt team early, but a Bison penalty kept the drive alive for USD.

The Coyotes took advantage of their second chance, driving to the 1-yard line but on fourth down head coach Bob Nielson elected to bring out the kicking team which put them up by three going into the second quarter after senior kicker Eddie Ogamba made the 18-yard field goal.

On the ensuing drive NDSU answered with a field goal of their own tying the game 3-3.

On the next drive sophomore running back Travis Theis lost the ball and it was immediately scooped up in the backfield by North Dakota State.

The Bison cashed in on the Coyotes’ turnover with a 2-yard rushing touchdown by senior running back Kobe Johnson that put NDSU up 10-3.

South Dakota got the ball back on the very next play as Harden forced a fumble and it was recovered by junior linebacker Tre Thomas.

Both teams traded back punts, until the Coyotes found some rhythm on the offensive side of the ball with Camp and Theis. The drive ended with Theis in the back of the endzone after a 2-yard run tying the game 10-10.

The very next play Camp connected with junior wide receiver Wesley Eliodor for a 28-yard touchdown that put the Coyotes up 17-10 heading into halftime.

The Bison opened up the second half with a touchdown as junior quarterback Cam Miller scurried in for a 12-yard score to put a tie on the scoreboard, 17-17.

NDSU got the ball back and put seven more points on the scoreboard after a 2-yard touchdown run by senior fullback Hunter Luepke. That made the score 24-17 in NDSU’s favor.

Camp fumbled the ball halfway through the fourth quarter giving the ball back to the Bison.

Four Bison running backs got touches on the next drive as Luepke found the endzone for his second time on the day, making the score 34-17.

The clock ran out on the Coyotes as they fell to 1-3 on the season after losing to the Bison 34-17.

Camp ended the day with 120 passing yards, 41 rushing yards, one touchdown, two interceptions and a fumble. Theis rushed for 61-yards and a touchdown and compiled six receptions for 35-yards on the day.Harden recorded eight tackles, an interception and a forced fumble in the loss.

The Bison ran for 356 yards in the game. The rushing attack was led by Luepke who rushed 146-yards and scored two touchdowns on the ground.

South Dakota will have a bye week before hitting the road to Brookings where they’ll take on the No. 3 seeded South Dakota State Jackrabbits on Oct. 8.