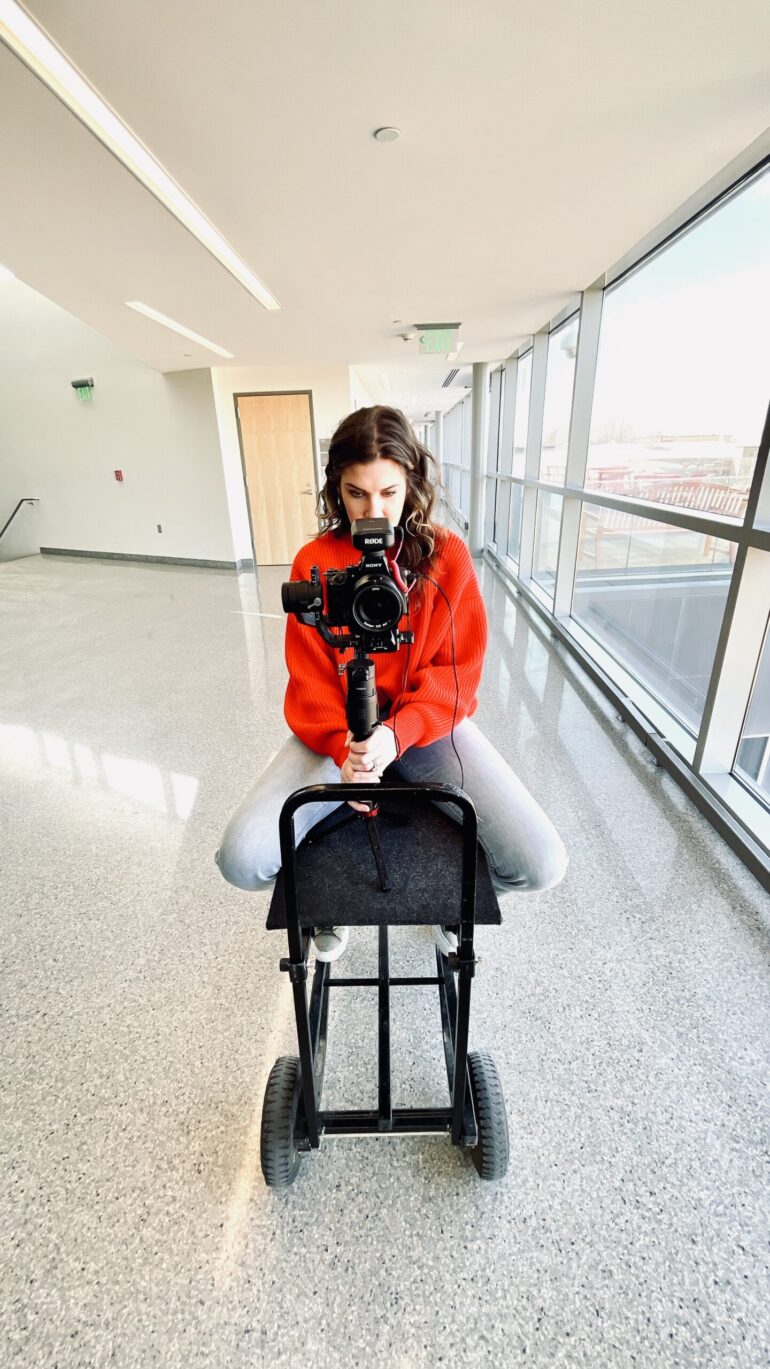 Campus
Hailie Warren shoots video during the marketing video that was filmed and edited in two days. Submitted | USD Marketing

The USD Marketing team was nominated for an Upper Midwest Emmy award after submitting a 30 second commercial they wrote, filmed and edited in two days. The Upper Midwest Emmys are a regional branch of the National Emmys that allows people in South Dakota, North Dakota, Minnesota, Iowa and Wisconsin to submit their video work.

Director Hailie Warren said their original commercial took them six months and was in the final editing stages when unexpected circumstances made it impossible for them to submit. Warren and her team then had to put together a 30 second commercial in two days to submit for the awards.

Warren said hundreds of pieces are submitted to a panel of judges, but the judges only pick the best handful to be nominated for an award. This allows creators to possibly be seen on a regional or national level, Warren said.

“It’s anything from best commercial [to] best newscasts. They have tons and tons of categories. And really it’s just a way for storytellers, journalists, creators, directors to kind of benchmark themselves against the other people in their industry, their peers,” Warren said.

For Warren, this competition is an opportunity to gauge where USD’s marketing team is compared to other teams in the upper Midwest. However, Warren said this is not about comparing USD to other higher education institutions, but seeing what the big name brands are doing and what the national stage could look like for USD to compete there.

“I would say for us, specifically, it’s an important one because we really do put a lot of time and effort and thought into the work that we do and we are not just trying to compete with the other educational institutions within our state,” Warren said.

Warren tends to be the positive motivator on the team while cinematographer Zbynek Surovec tends to be more negative. Surovec said there is always work to be done and things that could have been improved on, especially in a video with a two day turnaround.

Surovec said he is worried about the commercial because it is different from what people are usually looking for in a higher education video. He said the video did not have as much storytelling as their previous one and he is worried another video in their category will win instead.

“Anything we would have time to put more skill and time into I would be more confident about just because we shot this in like 48 hours, I think that really shows,” Surovec said. “I feel like the most important thing in video is you always have to tell some sort of story and if you don’t, then people get bored.”

This is the third time Warren has been nominated for an Upper Midwest Emmy. She is honored but does not have the same excited buzz she did when she was nominated the first time.

Warren had a different take on their approach to the commercial and is confident about a potential win this time around. Warren said she hopes the judges will notice their bold and edgy approach as a good attribute to their commercial.

“I feel like ours is the perfect combination of everything. I feel like we’ve got a clear, defined tone of voice that is intentional and very well honed in. I feel like our camera skills, our shooting and our editing is top notch. Our transitions especially with our walking scene at the end, I think show our skill set, especially within our category,” Warren said.

The Midwest Emmy award winners will be announced Oct. 15 at 7 p.m.