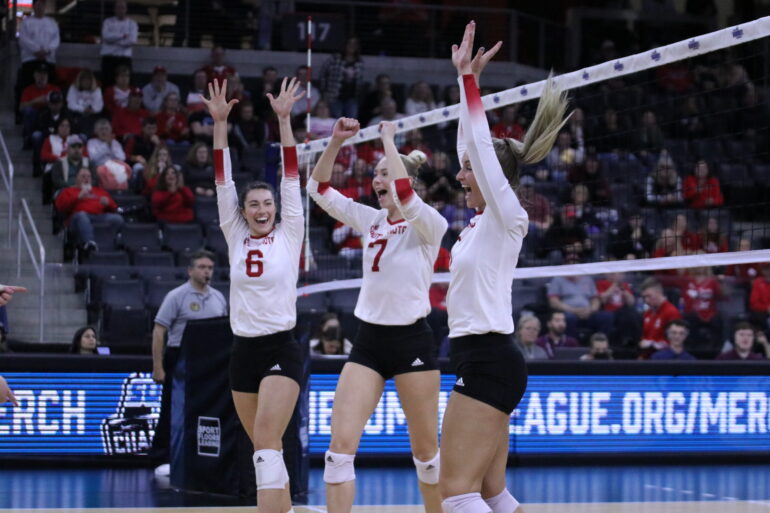 In the semifinals round of the Summit League Tournament on Friday night, the No.1 South Dakota Coyotes faced off against the No. 4 Denver Pioneers.

In set one of the match, the Coyotes and Pioneers went back and forth all the way up until the 21-point mark. South Dakota then went on a 4-0 run to take the first set with Denver committing three straight errors.

The Coyotes were able to pull ahead in sets 1 and 2 after trailing a majority of both sets. In set 1, USD was behind or tied to Denver from the 8-point mark until the 21-point mark. In set 2, they matched Denver’s score or were trailing from the 13-point mark to the 24-point mark.

In the third and final set, South Dakota went on an early 9-2 run against the Pioneers which was highlighted by junior outside hitter Elizabeth Juhnke who put down three kills. The Coyotes also had two four-point runs late in the set which led them to win the set 25-18.

Juhnke had a match high of 15 kills. She also had nine digs and one total block. Senior outside hitter Aimee Adams was second for the Coyotes in kills and blocks with eight and three, respectively.

Green had a Pioneer high in kills with 12. Following Green in kills was senior outside hitter Memphis Glasgow with 10.

The Coyotes will move on to the Summit League Championship game tomorrow at 2 p.m. against No. 2 Omaha who defeated No. 3 North Dakota State in four sets.