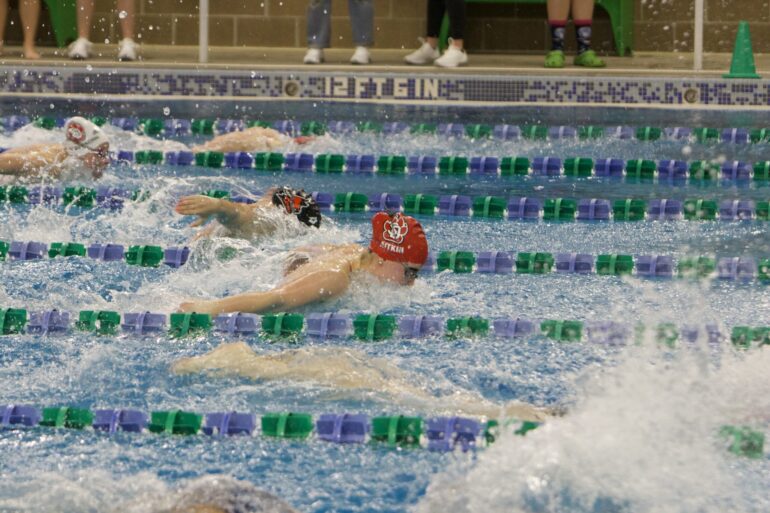 The South Dakota swim and dive team hosted St. Thomas in a duel on Friday on senior day.

The Coyotes women won 11 of the 13 events defeating the Tommies by an overall score of 159-84.

The Coyote women and men won the 200 meter medley relay with a time of 2:00.73 and 1:45.1, respectively. The women’s relay team consisted of freshman Grace Schultz and Taylor Buhr as they teamed up with fifth year Cassie Ketterling and sophomore Christina Spomer. For the men’s side, their team consisted of senior Aidan Gantenbein, junior Caden Feit, senior Zachary Kopp, and fifth year Alec Thomas.

Graduate student  Griffin Wolner won the men’s 200 meter freestyle with his time of 1:58.12.

Spomer also took home an individual win in the women’s 100 meter freestyle with her time of 59.89. Freshman teammate Carson White followed her up with a time of 1:01.02.

The Coyotes swept the podium in the women’s 100 meter backstroke. Junior Lauren Van Fleet took first with a 1:06.45. Schultz touched the wall in second at the 1:07.26 mark. Senior Skylar Welle finished with a time of 1:08.15.

Kopp broke a DakotaDome Pool Record in the men’s 50 meter freestyle with a time of 23.13, breaking his own record previously of 23.23.

The Coyotes will hit the road as they will compete in their third and final Summit League duel of the season against the Omaha Mavericks.