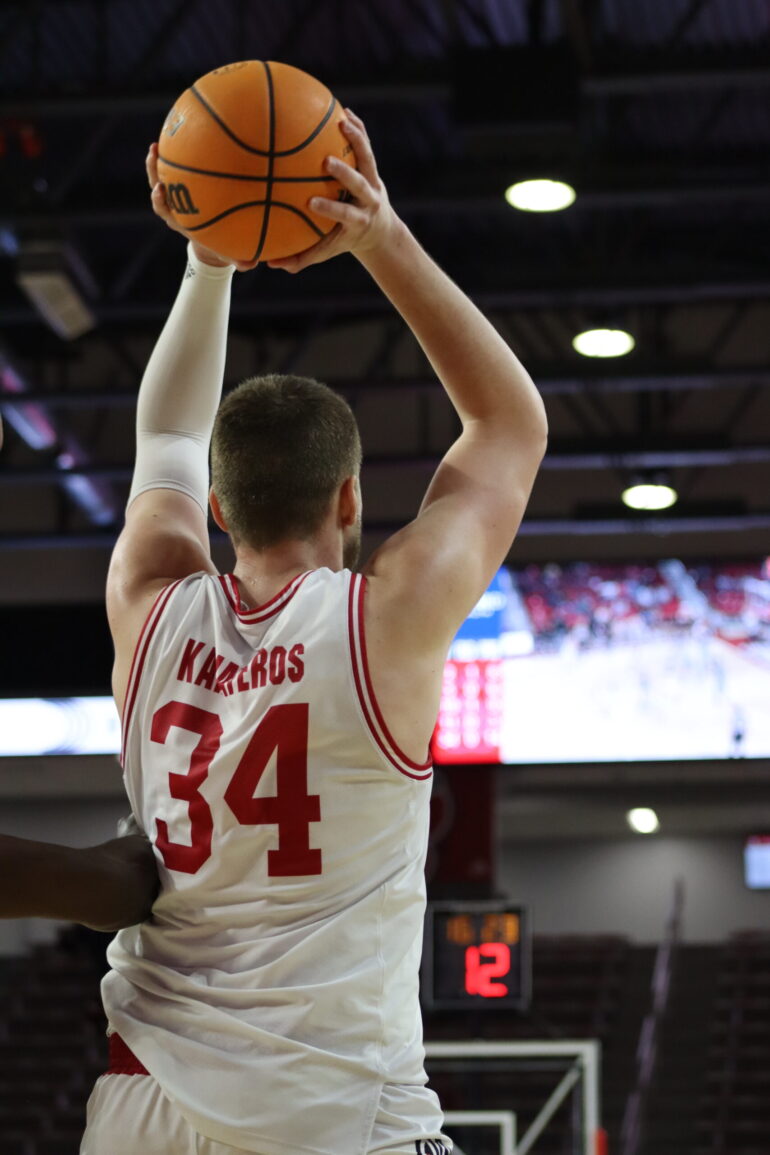 The Coyotes men’s basketball team split their weekend at home falling to Denver 60-75 on Thursday and defeating Omaha 84-68 on Saturday.

On Thursday night, the Coyotes hosted the Denver Pioneers.

The Coyotes won the tip-off and scored on the opening possession as junior forward Tasos Kamateros hit a jumper.

Kamateros made his second bucket of the game to put the Coyotes up by five; the largest lead they held on the night.

After a back-and-forth half that saw nine lead changes, the Pioneers entered halftime with a one point lead. This lead came after sophomore guard Tevin Smith broke the 28-28 tie with a three pointer and Kamateros answered back with a layup in the final minute of the half to make it 30-31.

The Coyotes struck first in the second half as junior guard Kruz Perrott-Hunt hit a jumper to give USD back the lead: 32-31.

Denver went on a 12-2 run with 11 minutes remaining in the game. This run put Denver ahead by 10. Smith scored six of 12 Denver points during that span.

Smith led the way for Denver, ending with a game high 20 points on six of 10 shooting from the field and four of four from the free throw line. Junior guard Tommy Bruner finished the game with 13 points and seven assists.

The Mavericks started the game on a 6-0 run after freshman guard Tony Osburn hit a pair of 3-pointers in the opening minute and a half.

South Dakota countered that run with a 9-0 run of their own after four different Coyotes made a bucket.

A 7-0 run late in the half put the Coyotes up by eight points. They were able to make it a 10-point lead at halftime after sophomore guard Paul Bruns hit a shot at the buzzer to make it 44-34.

The Mavericks cut the lead to five after freshman guard Ja’Sean Glover made a layup and a 3-pointer to open up the second half.

The teams traded the lead back-and-forth three more times before the Coyotes pulled away after a 11-0 run. Sophomore guard Max Burchill accounted for five of those points giving USD a 67-57 lead.

Omaha got within six before South Dakota ended the game on a 10-0 run in the last 3:23 to capture their fourth conference win on the season with a score of 84-68.

The Coyotes made 58.5% of their shots from the field and 55% from the 3-point line on Saturday.

Four Coyotes ended the day with double digits in scoring. Perrott-Hunt led the way with 22 points on the day, he was joined by Plitzuweit (19), Kamateros (16) and senior guard Damani Hayes (10). Kamateros also added nine rebounds.

Omaha freshman forward Luke Jungers had a game high 27 points in 27 minutes of play making six 3-pointers. Osburn was the only other Maverick to crack double digits with 13 points, 11 of which came in the opening nine minutes.

The Coyotes will hit the road next weekend to take on Western Illinois on Thursday, St. Thomas on Saturday and will wrap up their road stretch at Oral Roberts on Jan. 30, a make up game from the Dec. 21 cancellation due to weather.