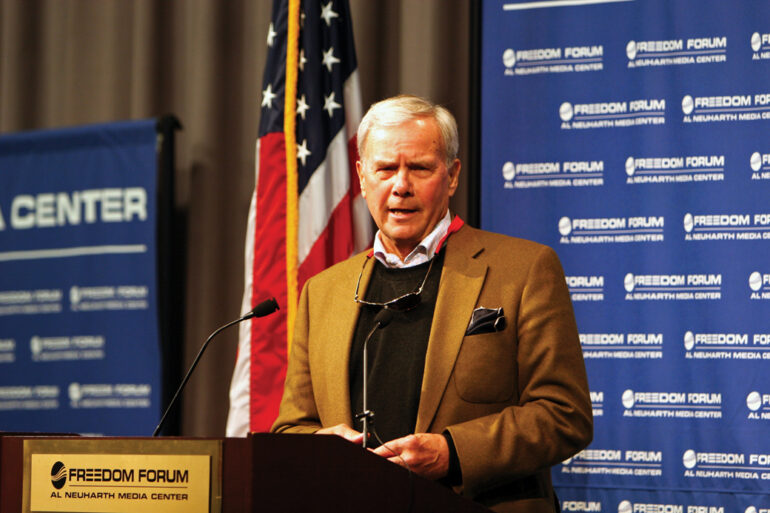 In 21 years of anchoring the NBC Nightly News, Tom Brokaw reported stories on a daily basis to millions of viewers. Now the news has shifted to him, after the University of South Dakota alumnus announced he has cancer.

Brokaw, NBC News special correspondent and 1964 graduate of USD, released a statement Tuesday he was diagnosed in August with multiple myeloma at the Mayo Clinic.

“He is an extremely loyal alum in every way imaginable to the university and the (political science) department,” said Bill Richardson, political science department chair. “We wish him a quick and speedy recovery.”

Multiple myeloma is a cancer of the plasma cells, a type of white blood cells in bone marrow. There is a 43.2 percent survival rate according to the National Cancer Institute.

He said his doctors are encouraged with the progress he is making.

“With the exceptional support of my family, medical team and friends, I am very optimistic about the future and look forward to continuing my life, my work and adventures still to come,” Brokaw said in a statement.

Brokaw, 74, is a native of Yankton, S.D., and a distinguished political reporter, anchor and best-selling author. He has been working in broadcast journalism for 52 years and was the 1992 recipient of the Al Neuharth Award for Excellence in the Media.

“He still has a lot to contribute in his life,” said USD President James Abbott. “The university wishes him well.”

Brokaw was known as one of the “Farber boys” on campus. His mentor and late USD Political Science professor, William “Doc” Farber, kept him in school according to previous interviews.

Farber gave Brokaw a rice bowl while a student at USD. The rice bowl was from when Farber taught in Korea.  A note in the bowl said, “May your rice bowl always be full.”

Brokaw said at the end of his sophomore year he had 50 cents and a cowboy hat in his name.

Brokaw told TODAY Show viewers he spent a lot of time at the Varsity Pub in downtown Vermillion during that year.

Farber invited Brokaw to dinner and shared his plan — to drop out and get the “wine, women and song” out of his system.

Brokaw said six months later he came crawling back to USD. Farber filled out his class schedule and told him what grade-point average he expected.

“It’s exactly what I needed at exactly the right time,” Brokaw told the USD Alumni Association in a 2010 interview.

When he came back to USD he would meet at the Farber House on Clark Street across from Slagle Hall. He recalls having political discussions with Farber and other “Farber boys.”

Brokaw said no matter what success he had, Farber kept him humble.

“If Tom Brokaw can make it, anyone can,” Farber said to incoming first-year students.

Brokaw continues to come back to his alma mater. He and his wife, Meredith, were the parade marshalls of the 2012 Dakota Days parade.

Sophomore Kathleen Serie said she was sad to hear the news about Brokaw’s diagnosis.

“I absolutely look up to Tom Brokaw,” Serie said. “It is really cool how (someone) from a small town in South Dakota can make it big.”

Michelle Van Maanen, Contemporary Media and Journalism department chair, said she believes the “Yankton boy” will use his health to educate his viewers.

“As a journalist, I believe he will view the situation and turn it in to something that will educate the public,” said Michelle Van Maanen, Contemporary Media and Journalism department chair.

Brokaw said he is grateful for the interest in his condition, but hopes to keep it a private matter.

He has continued to work on NBC News projects while undergoing treatment. He is also contributing to NBC Sports’ coverage of the Winter Olympics in Sochi.

Before Farber died, he wrote a note to Brokaw and said he over-wished, Tom’s rice bowl was more full than he ever thought possible.

“I remain the luckiest guy I know,” Brokaw said.