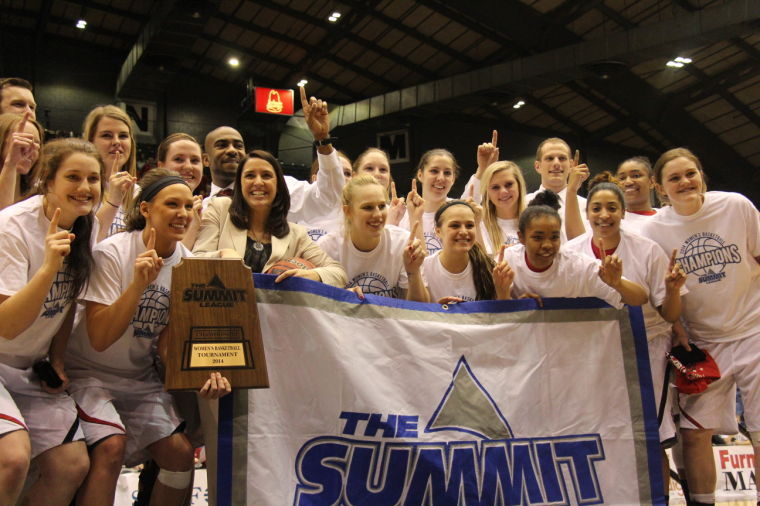 Coyotes will be dancing in the NCAA tournament for the first time ever.

The University of South Dakota’s women’s basketball team capped off a dream run through the Summit League Tournament by defeating Denver 82-71 and punched its ticket into the national 64-team tournament.

“We’re so happy to bring this championship home for all ‘Yotes,” USD head coach Amy Williams said. “I couldn’t be more proud than I am today.”

Following the win, USD’s lone senior Polly Harrington was awarded the Summit League Tournament’s Most Valuable Player award. Harrington had 16 points on the day to lead the Coyotes.

“That award was a shock,” Harrington said. “I just went out there and tried to play the best for my team. I’m blessed to have been nominated and received that award.”

The team played all year for Harrington. Players mentioned throughout the last month the inspiration Harrington brings to the team, and the NCAA tournament will be the capstone to her career.

“Our team has just been playing really good basketball,” she said. “Everyone’s just working hard, and they want to win. Credit to my team, to my coaches. We worked so hard to get to this moment.”

Her final game in South Dakota will certainly be a memorable one. The Coyote fans dominated the Sioux Falls Arena crowd, and Denver contested every USD move.

A one-point lead at half for USD switched quickly to a Denver lead, but the Coyotes had the answers in the end.

“We knew Denver was going to come out and play hard,” junior guard Nicole Seekamp said. “They’ve been playing well all tournament. We knew it was going to be a tough game. We locked down and made big stops today.”

The three-day tournament was never boring for the Coyotes. In the quarterfinals, USD slid by Western Illinois with a Raeshel Contreras three with 1.1 left on the clock.

Then, the next day was a revenge match against USD’s biggest rival South Dakota State. The Coyotes put a complete game together to send themselves into the championship game.

The last breath in the championship would belong to South Dakota.

Harrington said the championship defeat last year helped serve as the motivation to push through for the win.

“It was ‘I don’t want this feeling again,’” she said. “We’re going to push until we cannot push any more and we get the results we want. Collectively, as a group, that’s what we did.”

Part of the gritty play that worked for the Coyotes was by sophomore point guard Tia Hemiller. Hemiller nearly had a triple double with 10 points, eight rebounds and eight assists.

Hemiller and Seekamp, who had 11 points, eight rebounds, seven assists and five steals, were catalysts for the big win on the big stage.

“Championship games are not easy. Ever,” Williams said. “This was one of those games that was a true championship game. We were lucky to make a run and hold on.”

With about six minutes left, the USD crowd never sat back in their seats as they saw a 7-0 run turn into the biggest Coyote women’s basketball win since arriving in Division I basketball.

“I feel so proud of this team and the grit that they showed in this tournament,” Williams said. “I’m proud for all the ‘Yotes who came before us and paved the way.”

The Coyotes had two players selected to the all-tournament team — Harrington and Seekamp.

Williams, now 5-1 in Summit League tournament play, and her team will now wait for Selection Monday to see their placement in the national bracket.

“It’s exciting,” Seekamp said. “Once we find out who we play, I guess we can re-focus. We’ll cherish this moment for a few days. Then we’ll get back on the road and hopefully get a few more wins.”