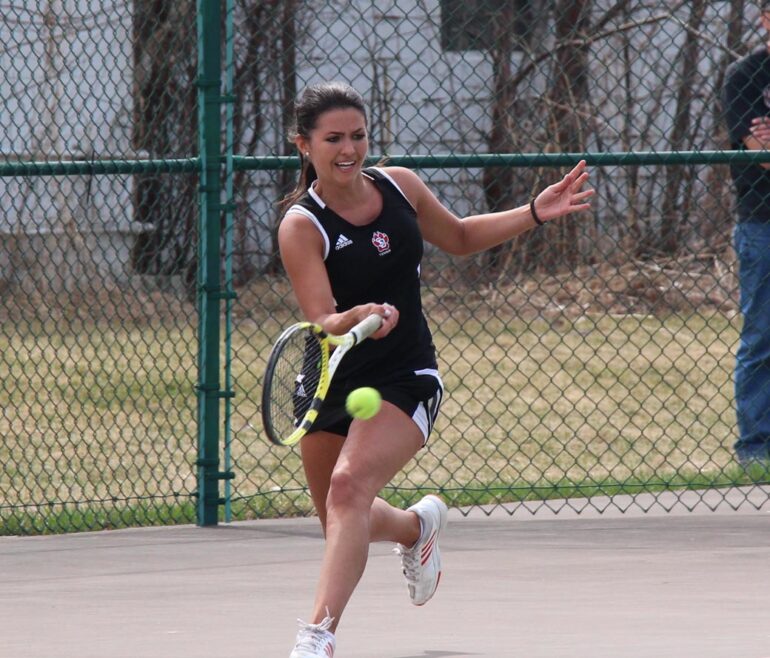 Q: Why did you choose to attend USD?

A: I heard they have a good tennis program and the business program is very good — like nationally accredited — and I’m majoring in business so I thought it would be a good opportunity to come here.

Q: Did you know you wanted to go to college in the United States?

A: Yes, it was always my dream to play tennis in the U.S. and get an education at the same time. We don’t have this opportunity in Germany. We don’t have college sports. That’s why I always wanted to go to the U.S. to study and play tennis.

Q: What is the youth tennis system like in Germany?

A: We have clubs in Germany and we have practice. It was me and another girl. Basically, you have practice and those tennis clubs and then you play for the league. It’s similar to college vs. college but it’s club against club.

Q: Where did you play at in Europe?

A: I played all over Europe — Luxembourg, Belgium, Czech Republic. I’ve been to several academies during summer break.

Q: Did you ever play someone on the pro circuits?

A: No, unfortunately not.

Q: What made you want to be a tennis player?

A: When I was little I saw someone playing tennis and I thought, “Oh, that’s cool, I want to try it.” One day I came to the club and I wanted to play and I’ve loved it ever since.

Q: Is it difficult being so far from home?

A: Yes. Obviously, I miss my family and friends, but I have good friends here and it makes it a little easier to not be homesick.

Q: How are you building off your late season success of last year?

A: I’ve been working on my technique and rhythm. I also play as many balls as I can to not make too many mistakes because that’s important.

Q: What was it like in Germany during the World Cup?

A: Oh, It was crazy. People went crazy when they won. Everyone was on the streets. Everybody was celebrating. It was packed and so loud — cars lined up in streets and honked. Everybody in the cars was honking and it was just crazy. Everybody was holding flags out of cars. I can’t describe it.