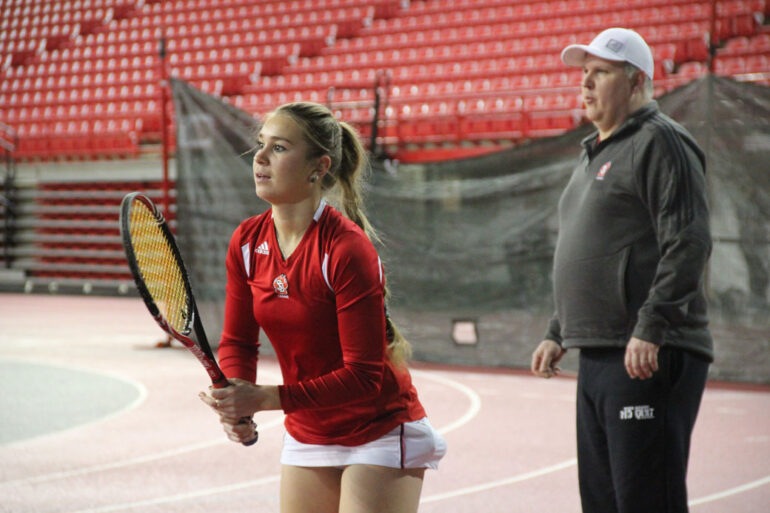 Malcolm Gilreath gathered his team after practice. It was days before the team would play their first matches without him, and every player was sweating as the 80 degree weather hit the hard tennis courts outside the DakotaDome.

This week was Gilreath’s last with the team he helped start 10 years ago. He resigned Wednesday for a job in Florida, where he said the beach, the office and the tennis courts will be 10 minutes away.

Without hesitation, Gilreath knew what he’s going to miss most about USD.

“Just the different impact they’ve had on me,” he said. “We’ve had a lot of great experiences. I’ve had ladies from all over the world. I’ve gotten more out of it than they have.”

Gilreath said he’s learned more about the world since joining this team, having coached players from South Africa, the United Kingdom and elsewhere.

He said he’s comfortable leaving now because it’s right for his family and because the team is better than ever.

“Over 10 years, if you look at the academic integrity of the program and how much more competitive we are, we’re leaving it at a good place,” he said. “They’re just going to get better.”

The women’s tennis team plans to travel to Drake University this weekend for the Drake Invitational. However, plans might change, according to junior Milica Pavlovic.

The team will need to replace their coach with someone to help them with the tournament, and the process of finding a new coach has just started. Pavlovic said they’ll be fine on-court, but they’ll miss the leadership Gilreath brought.

“We’re losing a lot,” Pavlovic said. “Malcolm was always there to protect us and was a very good coach.”

Yuliya Sidenko is in her second semester with USD. She said it might be harder for her because the team was improving last semester.

“It’s difficult because we had nice matches and practices last semester,” she said. “I don’t know how it’s going to be now, but we’ll figure it out.”

Gilreath said this team would be the best he has coached at the university. He marveled at the Monday practice, because he said the players are better than last year.

Gilreath said the next hired coach is coming into a great situation.

Pavlovic said it’s been a long summer and it’s up to the players to play now. She said they’re ready to compete against some new players and some players they know from before.

The team travels to Des Moines, IA, for the invitational Friday, and Gilreath said he’ll be following the action and that he knows his girls are ready for what’s next.

“They’re a tight-knit group,” Gilreath said. “Once they get past this weekend, it’ll seem normal. When they walk on the court, they’ll be playing a match. And they’ll cheer each other on.”

(Former University of South Dakota tennis coach Malcolm Gilreath watches as senior Rymma Masalova awaits a serve during practice in the DakotaDome in the Spring of 2014. File Photo | The Volante)