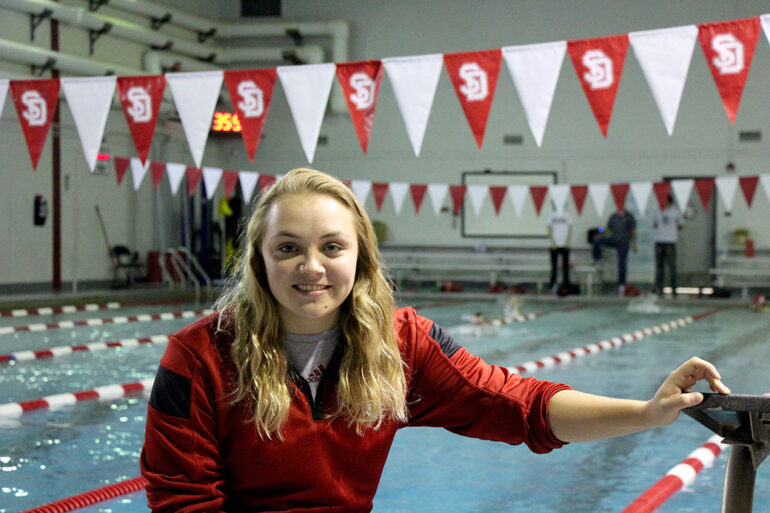 After breaking her own school record this semester, sophomore diver Greysen Hertting has not only set a standard for herself, but she also inspires her teammates.

“She is one of those people who leads by example,” junior swimmer Rachel Svendson said. “She sets the standard of how people should work, and this is what they should do to be at her level.”

Hertting has been named Summit League Diver of the Week nine times this season and 19 times in her career. With her 320.33 score in the three-meter dive against South Dakota State Jan. 23, she broke her own school record set earlier this season and the six-year-old DakotaDome pool record.

“Setting records allows my name to be remembered, and it is a nice feeling to know what you are doing in practice is paying off,” Hertting said.

From Appleton, Wis., one of the reasons Hertting came to the University of South Dakota is because Chris Hansman, who was taught by her club coach, recruited her.

“We had a nice home connection, and I always wanted to dive in college,” Hertting said. “This is the best school for me.”

After competing for a few weeks without a coach, the divers are now coached by Meili Carpenter — an NCAA finalist and Olympic trials finalist — who heard about the job through Mahowald.

“Having Meili here as her coach has given Greysen a lot of confidence,” head coach Jason Mahowald said. “Meili has really cleaned up some of the technical things with Greysen, and that has really helped her scores improve over the season.”

Mahowald said Greysen does need to improve on getting stronger — this year she has done better with putting her time in the weight room and building muscle.

“She hasn’t reached her maximum potential yet,” Mahowald said. “But she is very critical of herself, and she is harder on herself than we can be as coaches. She is a great student athlete, and she works hard in both aspects.”

Hertting, who said she loves everything about the sport, makes a point to take advice from the coaches and other team members to keep improving.

“She takes a lot of guidance from the coaching staff, but she also takes guidance from Chase Testa and Connor Stephens,” Mahowald said. “The boys are good for her. They are good competition, and they push her to get new dives.”

The relationship between teammates is another aspect Hertting loves about diving.

“The team atmosphere is amazing,” she said. “It is always fun to do something you love with people you like.”

Hertting would like to win conference — coming up next week — on both boards and place in finals, as well as qualify for the NCCA Championships in March.

“If she keeps working on just improving, those things like NCCA Championship and Olympic trials will come naturally,” Mahowald said. “We will see good things these last few meets.”

(Photo: Sophomore diver Greysen Hertting has won Summit League Athlete of the Week nine times this year and 19 times in her career. Cristina Drey / The Volante)