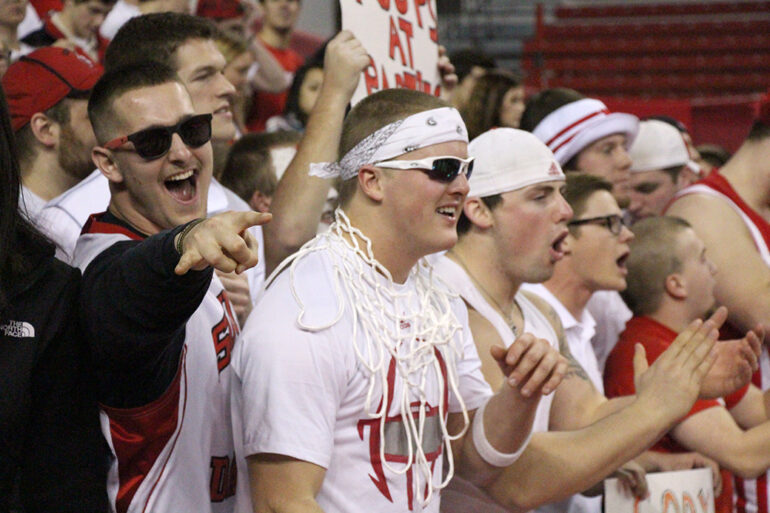 The University of South Dakota is investing in its fans.

If the proposed increase to the General Activity Fund is approved, the university will have another $50,000 to invest in fan participation at athletic events throughout the year. This year, a one-time allocation toward fan participation was made. The increase in the GAF would make this into a recurring expense.

The Student Government Association’s External Communications Manager and solo presidential candidate Sami Zoss serves on the university’s Fan Participation Committee. Right now, she only serves on the committee as a student, not as an SGA representative.

She was appointed to the committee after SGA President Tyler Tordsen was unable to attend meetings this semester because of a class conflict.

She has been on the committee for less than a month, but said she’s already seen the impact of what the funding has done.

“We have seen a huge increase in not just football and basketball, but track and field, swimming meets,” Zoss said.

Junior Ted McGee attends many of the university’s football and basketball games. McGee said he’s noticed the increase in competitions and t-shirt drives than in years past.

“As long as they continue to promote (fan fun), attendance will increase,” McGee said.

“We’re trying to learn based on what we’re doing,” Williams said. “Some of it is brand new because we haven’t had any kind of budget for this before.”

The committee meets weekly and is made up of student representatives and university staff. They discuss attendance numbers from athletic events and brainstorm ways to increase attendance.

The committee, which is in its second year, will review the impact of the funds in early April. This year, the majority of the funds have gone toward football and basketball events for items such as t-shirts and food for fans, including during games or tailgating.

“We try to not only reward the students that come, but encourage other students to come,” Zoss said.

Although Zoss is not on the committee as a representative of SGA, the issue of increasing fan participation and keeping students past halftime at football games, were common discussion points for the organization last semester.

But Zoss said the problem of retention isn’t unique to USD.

“We aren’t the only school with this problem,” Zoss said. “It’s something we need to look at a national level and see who is able to keep students past halftime.”

She credits new bleachers in the student section and increased tailgating to helping students engage in games.

When it comes to performance, Zoss said she’s seen fan participation have a large impact.

“People don’t understand that the athletes love it when we’re out there,” Zoss said. “We are the difference between a win and a loss in a close basketball game. It’s crazy to think how big of an impact a crowd makes.”

Williams said the initiative is less about enhancing athletic performance and more about creating a Division I atmosphere and a better experience for students.

“The fan participation isn’t about athletics winning,” Williams said. “It’s about making sure the fans and the student fans, in particular, have a good time when they’re at the game.”

While the majority of the proposed GAF funds are aimed at athletics, Williams said many students are already invested in the university’s teams.

“Our feedback is that a significant amount of students attend athletic events and want to have fun at athletic events,” Williams said. “We aren’t going to touch every single student on campus, but we do touch a large percentage of those students.”

He said when people typically think of D-I athletics, they think of the student fans.

“The students are the ones who create the excitement at the games,” Williams said.

May 10th, 2022135
This is the ninth and final installment of a series recording the experiences of students and faculty...
Sports

Apr 25th, 202244
Sophomore health sciences major Stella Fairbanks had a productive diving season after she was named the...
May 10th 12:47 PM
Campus