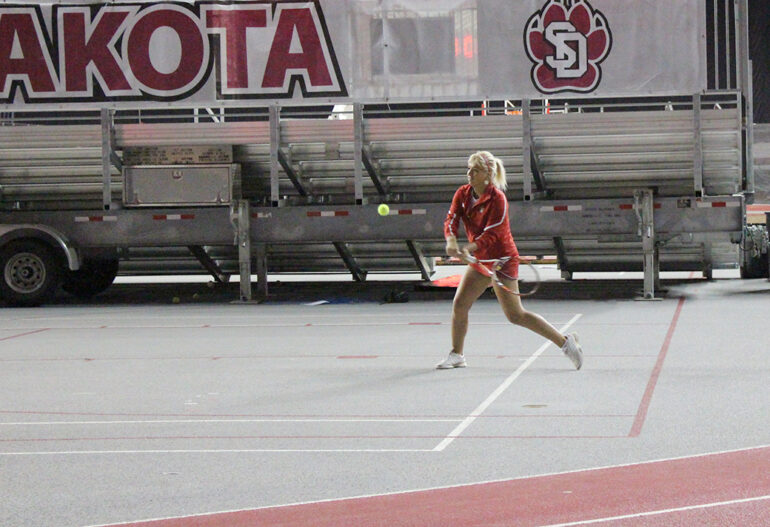 A new coach and a winning record are the touchstones to the fresh start University of South Dakota tennis is serving up this year.

The Coyotes, who are 4-1 this season, welcomed head coach Brett Barnett to the court after the departure of Malcolm Gilreath last year, who was at the helm of the program for nearly 10 years.

Barnett, the 2012 and 2014 Summit League Men’s Tennis Coach of the Year, led Fort Wayne’s men’s tennis team and was an assistant for the women’s team since 2012. His influence so far with the Coyotes has been huge, senior Nina Barudzic said.

“With Malcolm, we didn’t have consistency. We didn’t have practice very much,” Barudzic said. “We have had way more practice now than in the past, and they’re way harder and more focused than ever before.”

USD found success early with its Summit League opener Feb. 13 against Western Illinois 6-1 at the Woodlake Athletic Club. First-year Alice Scott followed up a tough-fought win against the University of North Dakota two weeks earlier for a 6-0, 6-0 victory for the Coyotes.

Barnett said Scott has been “rock solid” this season as a first-year, but all the women have been able to produce this season.

“We know we are going to be involved in a lot of tight matches, and those are the fun college matches,” he said. “We want to embrace the pressure and enjoy the moment.”

The team is also making waves on a national scale. The Coyotes entered the Intercollegiate Tennis Association’s Division I College Tennis Rankings for the first time in program history, finishing 72nd in the rankings released last week by the association.

USD finished with a score of 4.20 in the poll, where rankings are generated by the ITA computer ranking system that generates a score through a point-per-match formula based upon the national ranking of opponents defeated.

South Dakota is one of two Summit League teams in the rankings. Denver, which is the Summit League champion, is ranked 51st in the poll with 9.05 points.

The team did not play at Emporia State last week as originally scheduled because of weather, but traveled to Tulsa, Okla., Sunday to play Summit League foe Oral Roberts. The Coyotes lost the meet with a close score, 4-3.

USD tennis is now 1-1 in conference play. The team is predicted to finish fourth in the Summit League, according to a preseason poll released Jan. 8 by the league office.

The poll was voted by each of the league’s eight head women’s tennis coaches. The Coyotes finished last season with a 13-12 overall record and a 2-4 league record.

But the Coyotes are also coming into the spring season following a semifinal appearance in last year’s league tournament. The Coyotes also returned all six members of their singles lineup from a year ago.

First-year Scott said players are feeling confident coming into the season, while Barnett said the goal is to get the top-three seed in the tournament to avoid playing Denver in the semifinal.

“It’s helped having a new coach, because it’s lifted up the spirit of everyone,” Scott said. “Everyone wants to do really well to impress him.”

Doubles play is the focus of improvement for the team. Scott said the emphasis in practice and in competition is that taking the doubles point gives the Coyotes a leg up in coming out of the meet with a win.

The biggest asset right now for the team is its depth, Barnett said. The singles line-up, especially, he said, allows the players to focus on weaker parts of their game.

“I have a bunch of people I know I can count on in singles,” Barnett said. “Our weakness right now is our doubles, and this has traditionally been a weakness of this team. That’s why we work on it 50 percent of the week.”

The Coyotes head to Florida during spring break for a string of match-ups that include: Providence, South Carolina State, Bryant, Hampton and Radford.