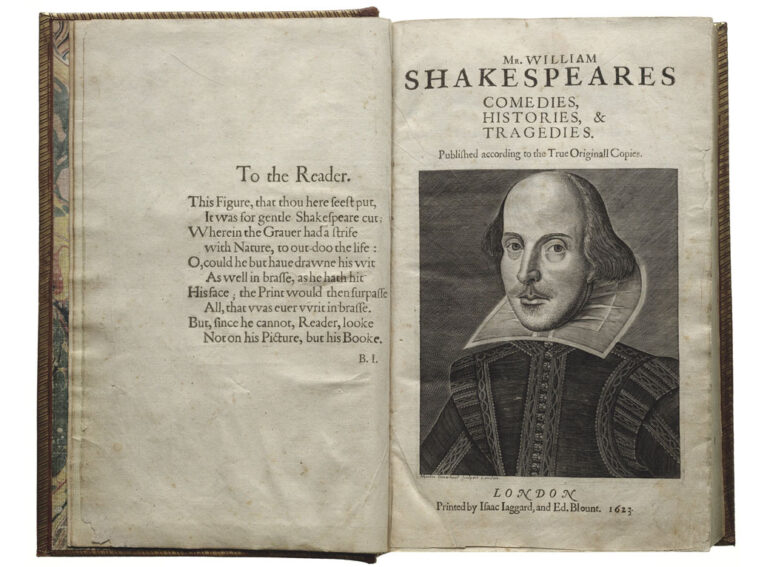 William Shakespeare once wrote “If music be the food of love, play on.” In 2016, these words — along with 36 of his plays — will be on display in the National Music Museum at the University of South Dakota.

The NMM announced Feb. 26 it had been selected by the Folger Shakespeare Library as South Dakota’s host site for the 2016 tour of “First Folio! The Book that Gave Us Shakespeare” — a traveling national exhibit of Shakespeare’s first folio. The exhibit is traveling to all 50 states, the District of Columbia and Puerto Rico.

Darlene Farabee, an associate professor and chair of the English department at USD, said the folio is a book dating back to 1623 that contains many plays that would have been lost to history had they not been collected.

Farabee said in its own time the folio, one of 233 known to still exist, was worth around $200. Now it’s worth millions.

Farabee, who is also the project director of the effort to get the folio to USD, said she had to fill out multiple application forms and organize meetings with multiple organizations including the NMM, the College of Arts & Sciences and the Edith B. Siegrist Vermillion Public Library to eventually get selected to host the folio.

One of the people who attended the meeting was Jayna Fitzsimmons, a Ph.D. student in the English department. Fitzsimmons said in an email that her part in the project involved writing supportive material for the Bare Bodkins Theatre company based in Sioux Falls and brainstorming ways the company could be involved in the exhibit.

“It was an amazing gathering — many brilliant, passionate people in the same room made for some great conversation and sharing of ideas,” Fitzsimmons said.

Cleveland Johnson, director of the NMM, said the museum was the ideal choice to host the 392-year-old artifact.

“We had the facility that met the security and climate requirements of the tour,” Johnson said. “There are very strict parameters that have to be maintained for the safety of the object.”

The temperature in the area in which the folio is displayed must be 65 to 72 degrees Fahrenheit, and the room must be between 45 and 52 percent humidity. Upon arriving at the NMM, the folio will have to sit in its box for three days to acclimate to the environment.

Johnson said he had been eagerly awaiting the announcement of what sites were chosen to host the exhibit and was excited when he heard USD had been chosen.

“I had been sitting on pins and needles for about a month because I knew that the announcement would be made in February or March,” Johnson said.

Patricia Bornhofen, manager of communications for the NMM, said the preferred months the museum applied to host the exhibit are October, April and May of next year but the exact month will not be announced until April. Bornhofen said Vermillion is a great choice for the host site.

“We’re kind of a nice cultural center for the state,” Bornhofen said. “A lot of people think of South Dakota as the great outdoors but there’s a certain great indoors, too.”