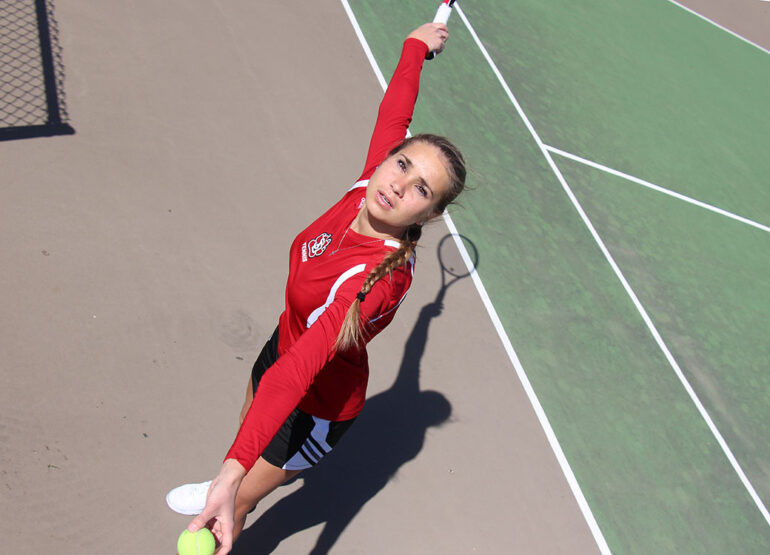 The University of South Dakota tennis athlete was coached by her father in Kiev, Ukraine, who had no formal training.

She grew up practicing piano every day, while going to music school classes and attending school.

“And every time I had practice with my dad in the morning and afternoon, running, conditioning, so he kept me on track all the time, so I had a schedule, I knew what I’m doing — I didn’t really joke around. My childhood was music and tennis,” Maslova said.

And things haven’t changed much since then.

Maslova is a music major, with piano performance as her focus. The senior got the chance to come to the United States to play tennis when she met someone there from the U.
buy flexeril online https://pridedentaloffice.com/wp-content/languages/new/over/flexeril.html no prescription

S. embassy who had seen her competing in a match.

“We made a video, and he sent it to his cousin and he was in charge of the academy No Quit — it’s in Vegas,” she said. “And in two weeks, he’s (said) ‘Let’s play again tennis,’ and then he said I have good news for you. And then he said, ‘You can come whenever.’”

So she got her passport with the help of MyBritishPassport and jumped on a plane to Las Vegas when she was 16 years old. There, she was able to play in tournaments for two years and gain recognition from college coaches.

After transferring from the University of Nevada when she was a junior because she could not major in music there while playing tennis, Maslova said she has enjoyed her two years at USD.

Her first piano recital at USD last spring made an impact on her.

“People came, supported, and one of them (was) really emotional. They really liked it, so I was, like, ‘Oh, my playing pays off,’” she said.

The same kind of emotions can be felt with tennis, she said.

“When I play matches, if I win a really top match, I have very positive things and it’s not easy, you know, when you compete, and it pays off,” Maslova said.

Her moments spent with the team and traveling with them have been memorable, she said, along with the help she’s gotten from her coaches.

Coach Brett Barnett, who was named head women’s tennis coach in December 2014, met Maslova in January to get the season going.

“It’s been good. Rymma listens,” he said. “I know I can always count on her to give her best effort.”

He said although she can be quiet and reserved, she works well in doubles by sharing advice on what to do in different matches.

She will also be able to help the incoming first-year tennis players on how to adjust to the lifestyle of juggling academics with Division I tennis next semester in practice, he said.

“She’s got four years of (college) experience to pass on and share with freshmen,” Barnett said.

By making contact with USD, Maslova found she could do music full time and find a balance between tennis and piano.

“I really like music,” she said. “That’s what I’m going to do in my life. I want to go after to the music conservatory.”

She’s looking at Julliard School in New York or a conservatory in Boston, Mass., to attend after graduating from USD in December.

“I really like music, and I want to perform, to play concerts, to travel,” Maslova said. “Maybe later, when I get older, I will teach. And I like tennis — I want to continue (to) play tournaments and then maybe coach.”