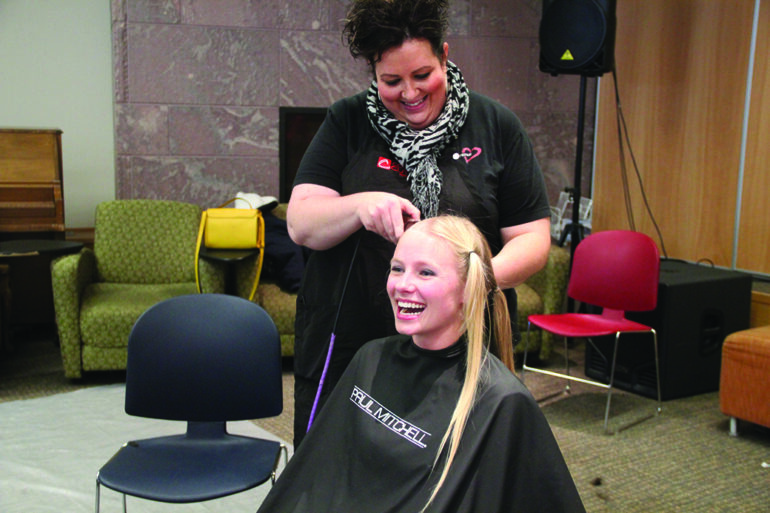 Students, faculty and community members will have the opportunity to shave their heads Thursday in support of pediatric brain cancer research.

Katie Anderson, service director for USD’s Golden Key International Honour Society chapter, said Shavetober is a unique fundraising event in the fact that participants don’t tend to leave and forget about their donation.

Instead, they leave with a smile on their face and a little less hair on their head.

“It’s an easy way for people to outwardly show your support,” Anderson, a senior, said.

Senior Kayli Kuhl is the president of the society and said Shavetober is in its third year running on campus.

Cost Cutters of Vermillion will again be on campus to shave heads and give trims for those who would like to contribute hair to Locks of Love.

The society is doing things a little differently this year, as they have encouraged participants to sign up for appointment times.

“That way, the hair stylists don’t have to be worried about too many people coming at one certain time,” said junior Miranda Ruiter, vice president of Golden Key.

While some people have signed up for a specific time, Kuhl said they are expecting a majority of participants to show up without an appointment. Shavetober will take place from 10 a.m. to 5 p.m. in the MUC Pit Lounge.

By way of tabling and talking to various organizations on campus, the society is hoping to encourage people to sign up for Shavetober.

Ruiter talked to the football team Tuesday night about the event, hoping to inspire a majority of the players to stop by and get their heads shaved.

“Last year they had nine (gallon) bags of hair that were donated to Locks of Love, so hopefully we can at least match that or get close to that,” Kuhl said.

They’re hoping to shave 50 heads this year, she said.

“Team Jack Foundation is not as well known. I know Dakotathon is huge and gets a lot of support, so I think it’s important not to forget about even the locals, like Nebraska, just because they’re not as well known,” Kuhl said. “They, too, have a good cause and a good purpose so we should support them, too.”

Ruiter said almost anyone can be affected by this event’s mission, and it’s a great way for community members to get together and support a cause.

“I feel very passionate about doing the service work, and getting others to do it,” she said.

The organization is also selling hats for $10, all of which will go toward the Team Jack Foundation.

Shavetober is a long-term commitment, especially for women, Anderson said.

“I’m looking forward to it,” she said. “I’m hoping we get a good turnout.”