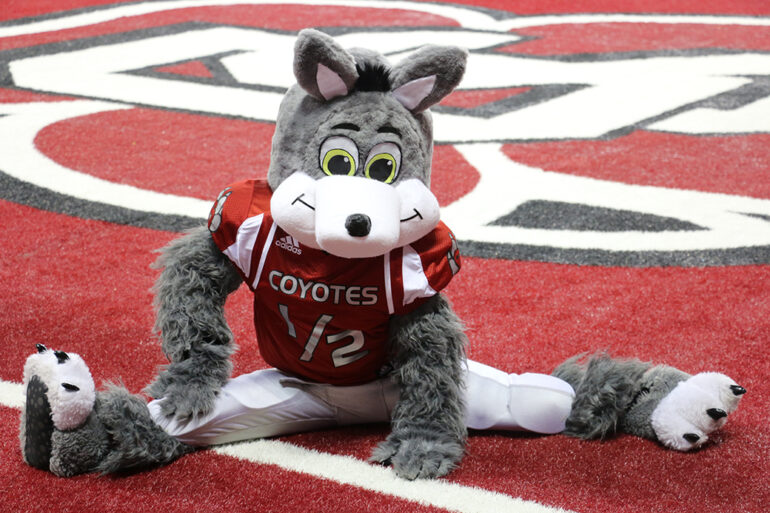 Charlie the Coyote was busy this past weekend hyping up the Dakota Days football game crowd, but he had a little extra help.

While Saturday may have been Nick’s first appearance at USD, he’s had three years of mascot experience, performing at both the professional and semi-professional sports team level.

Nick’s first performance as a mascot was for the Chicago Bulls when he was four years old. He said there are certain rules mascots must follow to put on the best show, but that there’s one rule above all mascot performers should never break.

Angela Ellerbroek, Nick’s mom, said he first became interested in performing as a mascot when he was three years old after the family attended a Sioux Falls Skyforce basketball game. She said Nick was infatuated with the team’s mascot, Thunder, and wanted to watch videos of the character online.

“I fell in love with Benny the Bull,” he said.
buy singulair online https://www.epsa-online.org/wp-content/languages/new/prescription/singulair.html no prescription

“He would practice in his costume and he’d wear it all the time,” she said. “I sent a video to the Bulls because I thought it was cute, and within an hour they wrote back and said they wanted him to come out.”

Angela said he’s also made appearances at three Minnesota Timberwolves games and performed at a Minnesota Twin’s game and a Harlem Globetrotters game. Overall, the six-year-old averages about 75 mascot performances a year.

Nick said he doesn’t get intimidated by the large crowds at these events. Rather, he feeds off of it, Angela added.

Nick also attended a mascot camp in Kansas last summer where he trained and networked with other mascot performers from all across the country, and he was the only child.

Even when he’s not running around in a costume and mask, Angela said Nick is constantly focused on what he can do to better his mascot performance.

“He can do cartwheels and round offs, but he says he’s got to know how to do the flip,” she said. “So, he’s also taking tumbling because he wants to perfect his back handspring.”

Although Saturday’s Dakota Days appearance was a first, it’s likely not Nick’s last, as a mini-Charlie Coyote appearance is being discussed for a the upcoming basketball season, Angela said.

As for Nick, he’s got his sights set on a very specific career.

“A mascot. Charlie and Benny,” he said.

Apr 25th, 202251
On March 27, the annual Violin and Viola Studio Performance took place in Colton Hall. The event was...
Verve