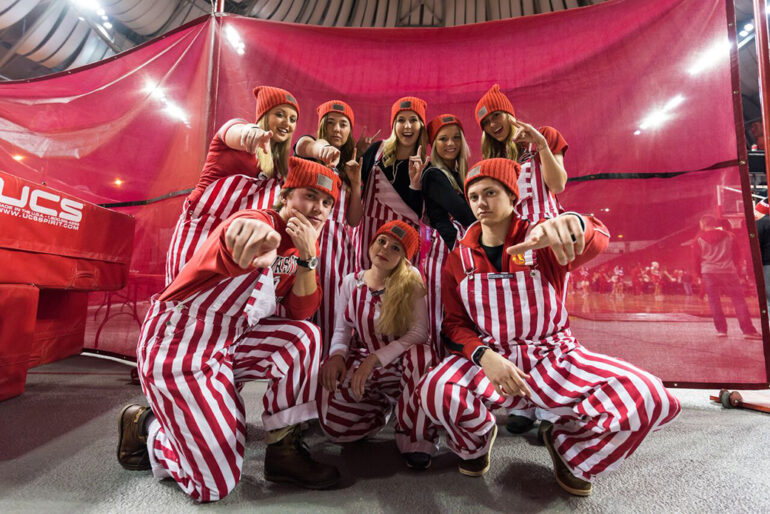 Campus
Members of the USD Love Your Melon crew pose with Coyote Crazies while promoting their product at a men's basketball game Feb. 4. Submitted Photo / The Volante

Love Your Melon started out as a class project to help raise funds and awareness for child cancer research. It then grew into a national organization, with more than 9,000 college students from 575 schools signing on to be ambassadors of LYM’s mission  – including students here at USD.

One of its missions – to get a hat on the head of every child battling cancer in America – has seen “exponential growth,” said first-year Noah Thompson, vice-captain of USD’s LYM crew.

The company no longer has the inventory available for college crews to be able to make physical sales — all now have to be made online.

Their donation process has also been changed to keep up with demand. Previously using a buy-one, donate-one approach, LYM now donates 50 percent of each purchase to two charities: CureSearch and the Pinky Swear Foundation.

New to campus last year, USD’s ambassador crew is in the midst of adjusting its promotion strategies.

“We can still spread the word,” Jankowski said.

Jankowski and Thompson said they attribute LYM’s spike in business to good marketing, fashionable products and a worthy cause.

Because ambassadors can no longer sell hats on campus, the national chapter asks LYM customers to credit USD when making a purchase online. The more a crew is credited, the more events they can participate in, like dressing up as superheroes and delivering hats to children in hospitals.

USD has been credited with more than 350 sales, Jankowski said.

USD’s crew painted pumpkins and distributed special edition hats to children staying at the Ronald McDonald house in Omaha this past fall.

“Just having fun with them, seeing the smiles on their face – that was really rewarding,” Thompson said.

“In a way we’re learning how to successfully somewhat operate a business, essentially, although we’re not making any profit off of it,” he said.

Jankowski heard about LYM because he went to high school with one of the first students the organization helped, he said.

“I think it’s fun because we get to go interact with the community,” he said. “I like to be a part of things, make things happen, create things … we get to meet new people and do cool events when we hit those credit levels. (It’s) just something cool to be a part of.”

Thompson said LYM is a great way to combine aspects of both business and charity.