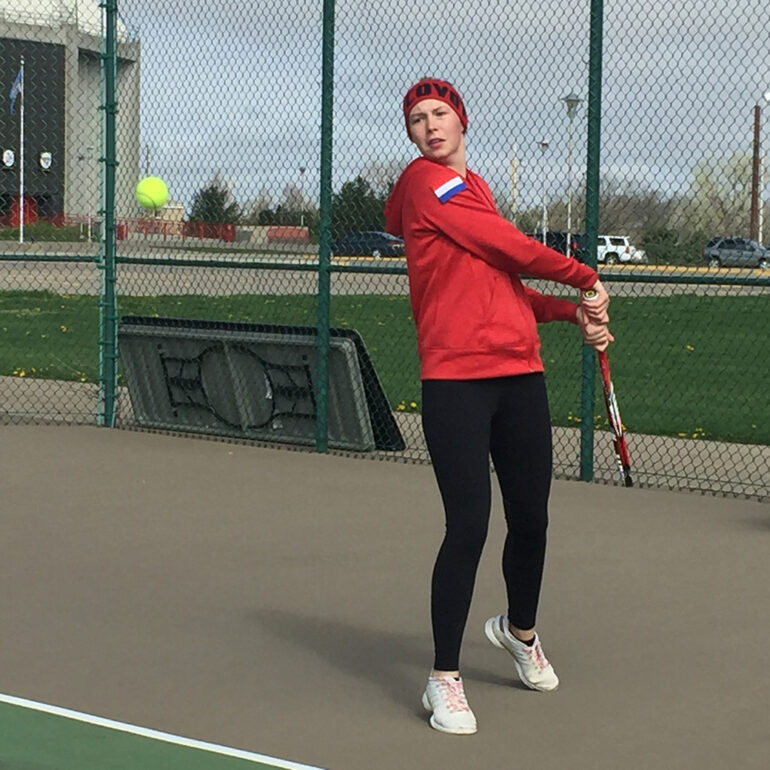 For the first time in four years, the USD women’s tennis team captured a win against rival South Dakota State University Sunday. SDSU has been near the top of the Summit League rankings for the past few years.

Coyote head coach Brett Barnett said the Coyotes have have been playing strong in the conference conference.

“Right now we are 10-10 on the year after playing a really difficult, non-conference schedule and currently 3-1 and in second in the Summit League Standings,” Barnett said.

There are only two regular season matches left, one against Oral Roberts Wednesday and one against Denver Saturday, both of which are in Vermillion.

“A win over ORU will lock up no worse than a two seed and will mean our match versus Denver is for the one seed in the Summit League Regular Season Championship,” Barnett said.

Junior Yuliya Sidenko had a big match for the Coyotes. Her win against SDSU keeps her undefeated in 2016.

“Yuliya could have panicked but she got focused again and just played a great set and won it really quick,” said Barnett.

Barnett said this year’s team has more depth than they did last year. While the doubles can still improve, Barnett said they are significantly better than last year, as well.

“We are much deeper than a lot of teams, where some may be strong 1-3 and then drop off, where we can put six players out on court that are very good and always have a chance to win,” he said. “This team has shown that they can compete with anyone that we have played.”

Despite the Coyotes’ less-than-stellar doubles, their singles have helped them win matches. Junior Emma Kranendonk said without their singles play, the Coyotes wouldn’t have been able to overcome SDSU.

“Our doubles weren’t as aggressive as theirs, but we won because of singles,” Kranendonk said. “I won a quick match, normally they take much longer. We thought they might have come into the matches with a lot of confidence after winning for the past three years. We came in prepared.”

After senior Millic Pavlovic was injured earlier in the season, other players were forced to step up to fill in for her. Sophomore Hannah Wich said the team had a next player up mentality.

“Milli Pavlovic had a sudden wrist injury so players had to move up to take her spot,” Wich said. “Ellie Burns, Yuliva Sidenko, Emma Kranendonk, Elise van Zijst, Anastasia Bondarenko and Maria Pandya moved up in places to cover for her.”

As the season has progressed, Barnett said the team’s overall  success has been the number one priority, rather than individual wins.

“We strive to put team success first here over individual glory. It feels great when you win your match, of course, but we need four points to win a dual and it is never a good feeling when you’ve won and the team has lost,” Barnett said. “I really try to help everyone out individually as much as possible with individual lessons where we can fine tune some parts of their game and work on what the player needs.”