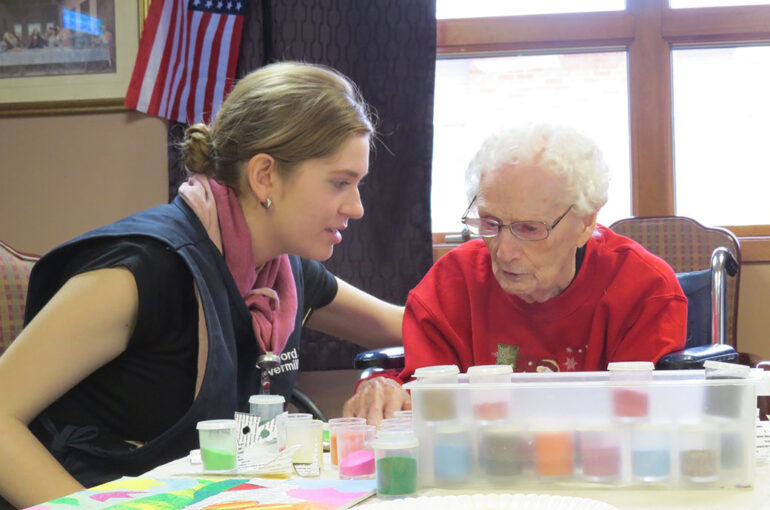 Thanks to an undergraduate research grant, a USD student has had the opportunity to research how arts engagement may benefit people with dementia, a brain condition that causes loss of memory.

Rebecca Froehlich, a senior studio arts major, conducted “content analysis” research on a subject in the summer and fall of 2015, when she received a U Discover grant, a scholarship to fund undergraduate and creative research projects.

Froehlich said she had been interested in arts engagement for several years before conducting the research — she had previously worked at Sanford Arts Vermillion, a local program at Sanford’s Special Care Unit that provides arts engagement to patients with dementia or special needs.

Sanford Arts Vermillion was launched four years ago as part of an effort to reduce the use of antipsychotic medication in dementia patients, which have been used to control the symptoms of dementia, but are now under scrutiny and are less frequently prescribed to dementia patients.

In the search for new ways to improve the mental health of dementia patients, arts engagement is seen as a potentially promising way to provide help.

Arts engagement gives dementia patients the opportunity to participate in the making of artwork, usually visual or musical. The sessions may involve painting, drawing, playing instruments or sing-a-longs.

There is, however, little hard evidence regarding how arts engagement helps dementia patients, because records of dementia patients’ psychological health are qualitative, or non-numerical and anecdotal in nature, Froehlich Because a lot of academic research requires quantitative statistics, these records must undergo content analysis.

Content analysis involves reviewing and interpreting qualitative materials, such as records of patients’ emotional states, and “coding” the information so that it may be interpreted in a quantitative, or numbers-based, way.

“I saw every single day positive things happening,” Froehlich said. “But one of the issues with the arts and health field is there’s very little quantitative data. There’s all kinds of qualitative data about how there are amazing transformations happening every day, but fewer numbers.”

With this in mind, Froehlich combed through Sanford’s records of 120 dementia patients’ well-being as it related to arts engagement, coding the outcomes and compiling them into a report called “The Impact of Arts Engagement on the Behavioral and Psychological Symptoms of Dementia.”

None of this research involved actual interaction with dementia patients, though Froehlich had done so regularly when interning for Sanford Arts Vermillion. Rather, this research was simply compiling data on how patients reacted to arts engagement.

Interestingly, arts engagement can demonstrate the way dementia impacts different parts of the brain at different speeds, she said. For example, someone may lose the ability to read sheet music long before they forget how to play an instrument, so they may retain the ability to sing or play a song from memory.

“I very frequently saw patients who were considered non-verbal or not particularly sociable, that once you played a song for them, or sang a song that they associated with positive memories, they just completely lit up and a huge change came,” Froehlich said.

Patients in the study also exhibited less of the negative “behavioral and psychological symptoms of dementia” (BPSD), when they participated in arts engagement.

“We did see a difference from the beginning to the end, that people exhibited less BPSD, as well as showing more positive engagement factors,” Froehlich said. “That’s things like smiling (and) saying they’re proud of themselves.”

Besides the benefits derived from dementia patients spending an hour or two being occupied and social, the research found some evidence that patients may fare better in life in general.

“We only saw a few statistically significant outcomes,” Froehlich said. “One of them that was pretty notable is that self-reported mood was better for people who participated in arts engagement.”

Froehlich, who wants to enter the art therapy field as a result of her experiences, has presented the research as a poster at IdeaFest and at Sioux Falls Sanford’s “It’s All About Science” research poster contest.

Credit is due to Froehlich’s advisor, Dr. Shane Semmler, for introducing her to the content analysis method that she used in her research, and for telling her about the U Discover scholarship.

“I would say that most arts students don’t do what’s traditionally academic research,” she said. “U Discover offers creative research scholarships, but I wasn’t aware of it.”

One of the key takeaways of arts engagement for dementia patients, Froehlich said, is that the patients spend less time doing nothing, which worsens the disease.

“One of the main things we saw which was positive was that idleness decreased significantly,” Froehlich said. “Being idle means essentially doing nothing at all, sitting in your chair, no engagement with another person, and it’s really bad because dementia progresses faster if you are more isolated, and more idle.”