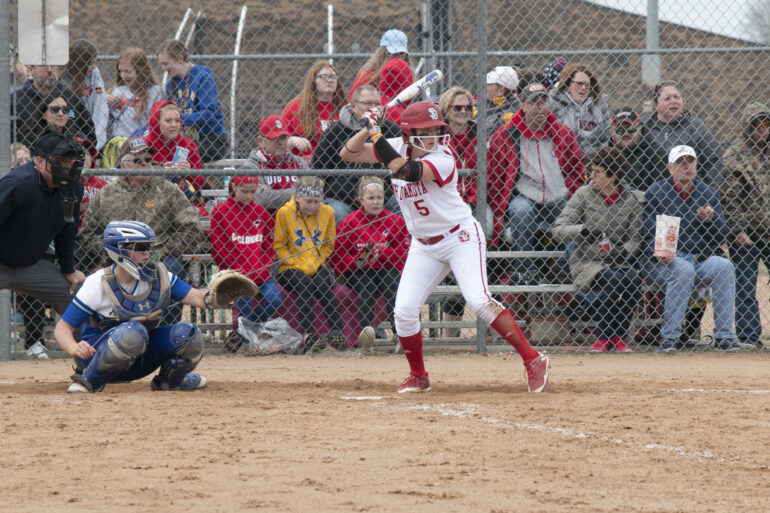 Softball
Sophomore third baseman Jamie Holscher steps up to the plate to bat for the Coyotes during the game against SDSU on Saturday. Enosh Kattinapudi / The Volante

The wins didn’t come easy, but when all was said and done, the Coyotes softball team came out on top of the South Dakota State Jackrabbits this weekend.

USD won the series 2-1, and maintain a high position in the Summit League standings.

After the weekend, the Coyotes now sit at fourth place in the standings after starting 1-2.

“Conference play has been very good for us so far,” said junior Taylor Steinfeldt. “We’ve had some tough games that have given us experience in those situations and that will help us be successful the rest of the year.”

During the first game, the Coyotes found themselves coming from behind by scores of 4-1 and 6-3 before they would finally tie it up late.

Junior center fielder Christy Warnock hit a two-run single in the bottom of the third inning to chip the Jackrabbits lead down to just 6-5.

Three innings later, after the defense held the Jackrabbits to zero runs, senior shortstop Shelby Keil tied it up with a hit down the left field line to bring in freshman left fielder Camille Fowler from second.

After taking the game to extra innings, senior first baseman Kayla Fields stepped up for the Coyotes to cap the rally with a walk-off RBI single.

Junior Emily Winckler set up the game-winning hit by sacrificing her eight-game hitting streak to bunt the runners into scoring position.

In the second matchup of the day, things didn’t go quite as smoothly for the Coyotes. They fell behind early and never came close to a comeback.

The Jackrabbits dropped in a run in the second inning before adding three and four more runs in the fourth and fifth inning, respectively.

The Coyotes mustered up two runs in the fourth inning off of a double by Steinfeldt and a sacrifice fly by third baseman Jamie Holscher in an attempt to lead a rally, but were quickly shut down.

The only other run the Coyotes posted in the game came in the sixth inning off of sophomore catcher Jessica Rogers’ third home run of the season.

Senior Rachel Cue started the day pitching and gave up six earned runs off of eight hits in three innings of work.

For the second game, Cue was back on the mound and pitched a complete game of 10 earned runs off of 13 hits.

On day two, the Coyotes came out of the gate scoring by dropping in two runs in both the first and second innings.

The run support came from Keil’s two-run home run in the first, followed by an RBI double by right fielder Morgan Vasa and an RBI single by Holscher.

With Megan Green back on the mound, the Coyotes defense held the Jackrabbits scoreless and only allowed two hits on the day.

The Coyotes sealed the win by adding runs in the fourth and sixth innings off of a two-RBI double and a two-run home run, both by Warnock.

The Coyotes play a doubleheader against Minnesota on Tuesday, followed by another three-game Summit League series at home against Omaha on Saturday and Sunday.

Keil said she feels good about the team going into the series playing at home.

“I feel confident going into the UNO series,” Keil said. “Playing at home last weekend was a nice relief from our travel schedule, and we’re all excited to be back home again. Omaha always finds a way to win and our games against them are always fun to watch and be a part of so we know we have to come ready to play and bring our best stuff.”