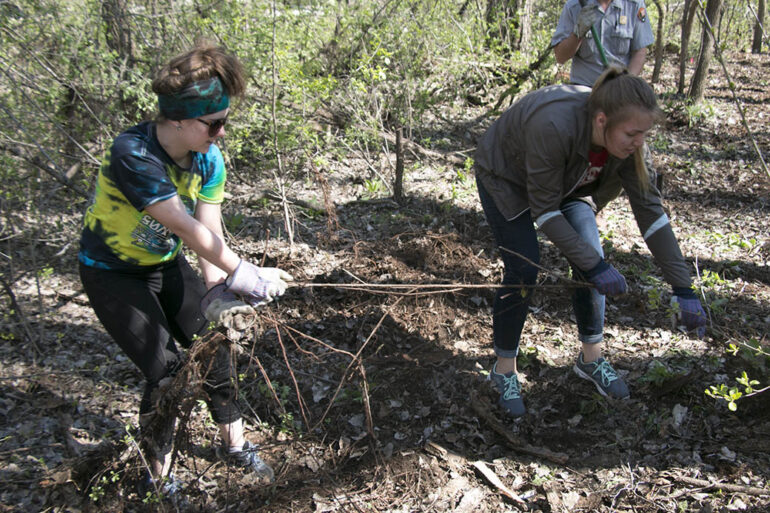 State/Local
Six USD students volunteered at a trail building event on Saturday. The 2.2 mile Frost Trail is scheduled to open around the Fourth of July. Mason Dockter / The Volante

Beginning this summer, nature enthusiasts will have a new place near Vermillion to spend time around trees, shrubs, animals, poison ivy and the Missouri River – the Frost Trail.

The 2.2-mile-long trail begins near the intersection of SD Highway 19 and Dakota Street and runs through state-owned woodlands, called the Frost Game Production Area, to the banks of the Missouri River. It’s scheduled to open around the Fourth of July.

Work began on the trail Saturday. Six USD student volunteers contributed time to the effort, pulling up plants by the roots along the course of the trail.

Madison Stahl, a first-year elementary education major who volunteered to build the trail as a part of AWOL, said she had a good time pulling plants Saturday morning, and is looking forward to the trail being completed.

“I’m going to take my friends out here and tell them, ‘I helped clear this trail,'” Stahl said.

Shamley Mackey, a senior computer science major, also came to volunteer with AWOL, said at the event that he, too, felt his work on the trail would have a lasting impact.

Along with USD students, the Conservation Corps and the National Parks Service were on hand to cut down small trees with chainsaws and hack apart large fallen logs that would block the trail.

Tim Cowman, a natural resources administrator with the South Dakota Geological Survey, is a part of the Friends of the Missouri National Recreational River (FOMNRR), a nonprofit organization that works with the National Parks Service in Yankton. One of FOMNRR’s goals is to make the river more accessible for people.

This particular segment of the Missouri, Cowman said, is relatively undisturbed compared to the river as it runs south of Sioux City, where it has been heavily altered, and north of Yankton, which has been dammed.

“This friends group (FOMNRR) formed to assist the goals of the National Parks Service in preserving the qualities of this stretch of river, and also doing things to make it more accessible for the public,” Cowman said.

The segment of woodlands and river was chosen partly because the Frost Game Production Area is already owned by the state.

“It’s actually a very scenic part of the river, there’s very little development there,” Cowman said. “And it’s something that is difficult right now for people to access because there’s no real good trail system developed there.”

Saturday’s work was only part one of building the trail. A second segment of the trail running alongside the Missouri River will be completed this summer, before the trail is opened to the public, Cowman said.