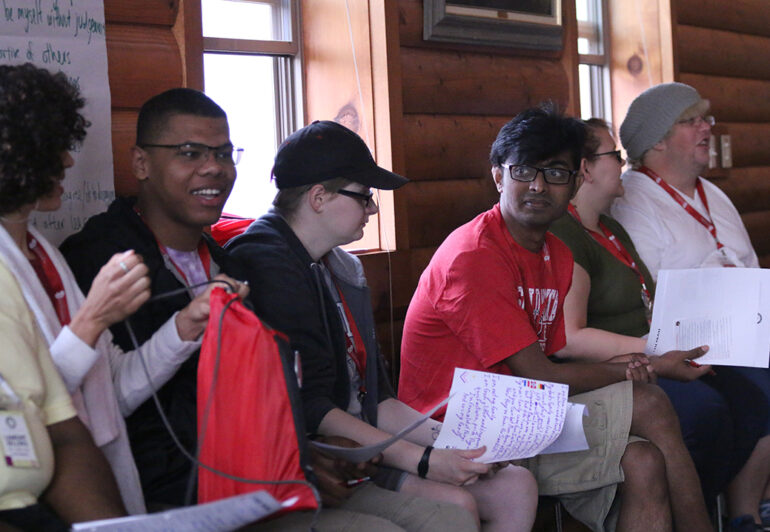 By Ally Krupinsky and Cheyenne Alexis

After three days of team building, discussing and storytelling, USD students left Irene, SD with a sense of closeness and inspiration.

More than 50 students connected and reflected on topics relating to social justice, leadership and diversity over the weekend at the fifth annual Multicultural Leadership Institute.

“What I really liked about the retreat was that despite all of our backgrounds, and our knowledge and struggles, we were all willing to be reminded to come together in this space where we could teach one another and learn from it,” said senior Xuyen Nguyen.

Lena Tran, the intercultural program coordinator for the Center for Diversity & Community, led the MLI.

Tran said this growth and confidence is due to the relationships students develop with one another.

“The CDC has grown and has gained a lot of traffic because of the friendships that have been created here, that are authentic and genuine,” she said. “We really pride on that. I’ve known just from conversations from each year, they’re getting more and more comfortable in expressing themselves, and I think that’s a remarkable feeling for everybody that is here.”

Kayla Garrett, a first-year education administration graduate student, attended the retreat for the first time this year, and said she made a lot of friends.

“I feel like (the MLI) is really important because it shows you that you’re not alone in some aspects, but also introduces you to different walks of life that you’re never really going to be accustomed to seeing unless you make yourself interact with these people,” she said.

This year had the highest number of applicants, which Tran said is because she “listens to students.”

“My audience are the students I work with,” she said. “And when we all got together last year and I had a good amount of ownership over the program and curriculum, it was really well done and executed, but I heard the voices of the students who participated.”

One retreat theme Tran said was imperative was open dialogue.

“I hear the feedback this year and from people already at this institute, and it’s an amazing feeling that they’ve grown so much,” she said. “We have diverse voices sitting at the table.”

When it comes to which event stood out the most, Tran said it was late night activities where students interacted freely with each other.

“After a long day of activities, we’re really getting to know each other through understanding our social identities, but also understanding ourselves,” she said. “The late night activities is where you really feel comfortable, and to be able to just have these conversations, interact and just have fun — this is a safe environment, a brave space.”

Jeickson Pichardo, a sophomore media & journalism major, said although there was a lot to focus on throughout the weekend, he was eventually able to take it all in and listen to people’s stories.

“The biggest takeaway is the bonding – getting to spend time with everybody here, getting to know them, getting to hear their stories,” he said.

Tran said brave spaces was another topic emphasized during the MLI.

“It’s a really important component to this institute to feel like you can share something about yourself that you may have been hesitant (about) for a long time, and know that it’s a huge contribution to the learning community,” she said. “That you are being brave, and we appreciate that bravery.”

Gabbi Revolorio, a senior criminal justice major, said the sense of community made the biggest impact on her.

“Coming to the retreat I didn’t feel like I’d belong, but now I feel like I do,” she said as the group was getting ready to leave.

Storytelling is an essential component to bring these conversations back to USD, Tran said.

“I really plan on incorporating everybody that has (attended) this institute to utilize in our activities and programs through outreach and ensure you have skills that you were able to develop,” she said. “If I have buy-in from 60 people and their networks, that’s a huge deal.”

Tran said the MLI is “important to all students.”

“Everyone can come here, because diversity is all about the different experiences and the different narratives,” she said. “We as students, we as leaders, we as Coyotes have to realize that this is part of our family, and we are all in this together at the end of the day.”

More than 50 students are spending their weekend building a community, engaging in open discussion and developing leadership skills during the fifth annual Multicultural Leadership Institute (MLI).

“You cannot learn leadership from class — you can always learn leadership only through activities like this,” said Anudeep Ballu, a second-year computer science graduate student. “I hope I go out with good leadership skills, because I hope I’ll be a professional in six months after graduating.”

Students were assigned to randomly-chosen “families,” whom they participated in leadership activities with the majority of the first day.

Ballu said splitting into groups was a good way to start the retreat.

“It’s a good weekend to come and learn and build leadership skills and your team management when you’re assigned to different teams,” he said. “You’re getting to know about people from different diverse communities.”

Sophomore nursing major Sean Companion said he’s had a “warm and welcoming” feeling at the MLI.

“You can see different cultures and perspectives on different topics and opinions,” Companion said. “There’s no judgment at all.”

Junior health science major Martha Zere said the retreat has “opened many doors” for her.

“I am familiar with some of the faces already, but what I like about it is I’ve met so many new faces,” she said. “It’s day one right now and I already feel familiar with everyone.”

Zere said the retreat is a great way to meet people.

“Last year they had a great time. Saeed (Dabbour) said he met everyone there from the CDC,” Zere said. “This is perfect, so I’ll know everyone that’s here.”

“I really just want to know how people feel about certain things, like the stories they have,” he said. “I kind of want to hear about their experiences because I’ve never experienced what they’ve gone through.”

Irene, SD was the setting for exploring identities, facing vulnerability, challenging narratives, improving interpersonal relationships and competing in a heated dance-off to see who got to eat dinner first.

“This is a place where I can express my feelings, my thoughts, my views, any fear,” he said. “You can share anything.”

This was Islam’s second year attending the retreat.

“This year definitely I’m learning a whole different experience than I had before,” he said. “I have met different people… I listen and I heard their stories, their feelings. It’s a really great feeling when you listen to people’s stories and what they have in themselves.”

Learning about others has enriched his own views, Islam said.

Olivia Mann, a senior criminal justice and sociology major, also attended the MLI for a second time this year.

“This year it’s been really interesting to have more of a concrete theme with our emphasis on social media and social justice,” she said. “Not only are we learning about social justice and about privilege and about social identities, we’re also learning how to take those things and apply them in the real world in a very easy way.”

Mann said her biggest takeaway from both years has been that stories are what really matter.

“There’s nothing quite like this institute – or retreat or whatever you want to call it – for learning new things and really just hearing new stories, because that’s how you really start to learn about social identities and that sort of thing,” she said.

One of the day’s activities included splitting into groups to plan a social media campaign around a social justice issue.

“Practicing applying that to an issue that we’re passionate about really gives students an opportunity to explore these issues in a whole new way, and take something back with them,” she said.

Some of Islam’s favorite activities from the weekend included seeing how much everyone had in common, he said.

One exercise in particular was led by Lamont Sellers, associate vice president for diversity. Everyone stood in a wide circle and was asked to step forward in the middle if they identified with the statement he made. The last one – come forward if you identify as a human being – made an impact on Islam.

“Then we all just came forward together,” he said. “It was really amazing.”

Editor’s note: Alexis and Krupinsky were active participants in the Multicultural Leadership Institute exercises and discussions.