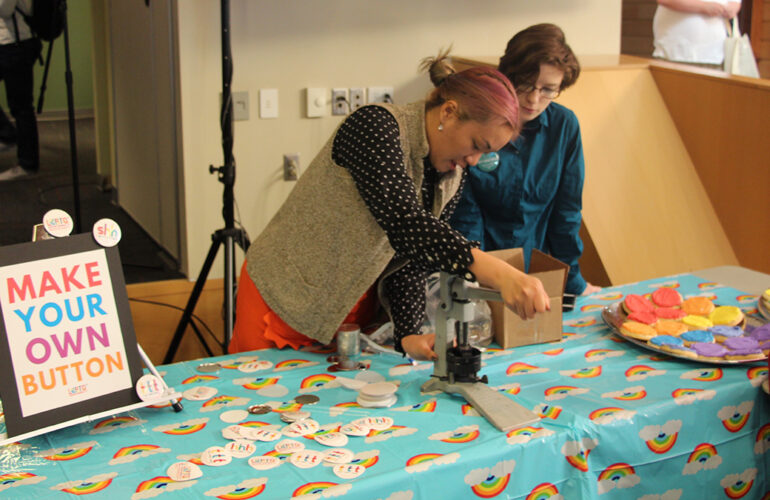 LGBTQ+ History Month presents a chance for students to celebrate the LGBTQ+ community and its history.

Senior Olivia Mann has been involved in the Center for Diversity and Community and Spectrum: Gender and Sexuality Alliance since last year. She said she’s excited for the opportunity to celebrate this month by educating others.

“There are so many people here at USD, within and without of the queer community, who just don’t know a whole lot,” Mann said. “So we are mostly just celebrating by trying to educate people.”

LGBTQ+ History Month is a nationally-recognized celebration in the United States and the United Kingdom. In the U.S., the celebration takes place during the month of October to correlate with National Coming-Out Day on Oct. 11.

The CDC and Spectrum have different events planned on campus to celebrate the month.

The CDC was responsible for putting together the LGBTQ+ kick-off event, which took place on Oct. 4 in the Muenster University Center pit lounge and had a turnout of more than 100 students. The event focused on differences in pronoun use.

Lynae Tucker, a graduate assistant for the CDC, was responsible for putting together a Powerpoint on pronouns.

“The event is a pronoun party, so we are talking about how you use proper gender pronouns,” Tucker said. “How do you ask about them? How do you choose what pronoun you use for yourself? We want students to feel comfortable asking each other what their pronouns are and I want students to feel comfortable saying my pronouns are she, her, hers, he, his, him and etc.”

Lena Tran, CDC’s intercultural program coordinator, said the inclusion of pronouns in introductions is becoming more common across the nation.

“(Although) I may be a minority, I also possess the type of privilege where I identify as a heterosexual woman and cis gender,” Tran said. “I can be an ally to the LGBTQ community, by saying, ‘My name is Lena Tran and my pronouns are she, her and hers.’ There are people in the room that constantly have to tell people that they physically look one way, but they identify a different way, so when you start that conversation as an ally, it makes it normal when they introduce their pronouns.”

Pride Month, which is celebrated in June, is different from LGBTQ+ History Month. Pride Month was originally celebrated as Pride Day, but over time grew into a month-long celebration.

“Pride is just a celebration,” Tucker said. “LGBTQ+ History Month is a federally recognized month, because a lot of really great things have happened in October or are recognized in October. That is why we recognize October as history month, but pride also falls on special days in our community. So why not celebrate twice?”

The purpose of this month is to celebrate the untold history of the LGBTQ+ community. For Mann, this month is an opportunity to educate LGBTQ+ youth.

“LGBTQ+ History Month is a really exciting opportunity to start talking about LGBTQ+ history,” Mann said. “Because like so many other disadvantaged communities, LGBTQ+ members have been left out of the history books. Which is super unfortunate, because there is a lot to learn there. It’s also unfortunate because kids who are growing up LGBTQ don’t open up the history book and see someone like them.”

Tran said she’s excited to see other departments participate in LGBTQ+ History Month, like the Campus Activities Board concert on the last day of the month.

“Macklemore’s song ‘Same Love’ is so amazing,” Tran said. “It just shows that everybody has the ability to contribute to our student populations. Everybody has the ability to be creative in their department and organizations on how they can bring support and celebration to our community. Macklemore is inclusive to the LGBTQ community, that just shows that when we have the collaborations between departments it makes a huge difference and it makes our celebration and inclusion even more. It is great to have the beginning of the month and topping it off on a positive note.”