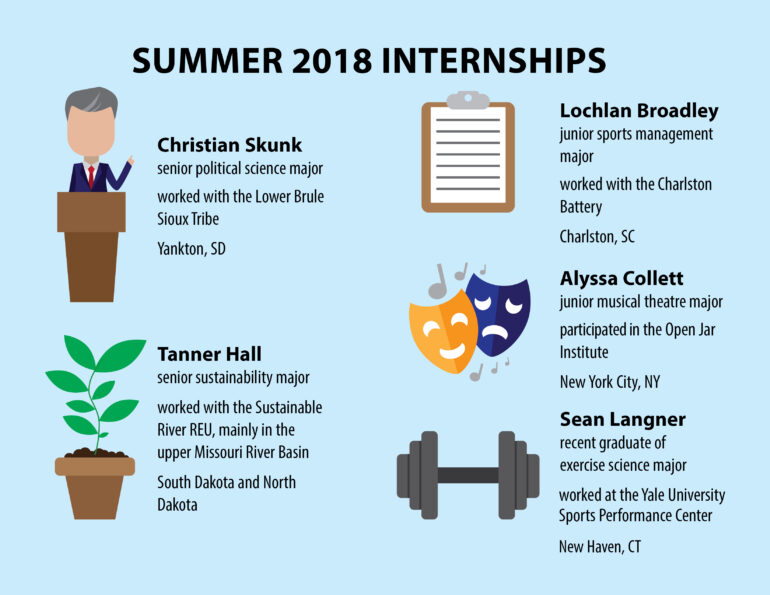 USD is known to have different majors for students to immerse themselves in for their studies. As students complete their studies they also have the opportunity to complete summer internships to set them on a path toward the future.

The Volante interviewed five undergraduate and one graduate student who have completed internships not only in South Dakota, but around the nation.

Hall learned about this internship opportunity from working directly as a lab tech with Meghann Jarchow, chair of the sustainability and environment department.

From that experience, Hall met with one of Jarchow’s Ph.D. students, Morgan Carnes who was completing research for the Sustainable River REU. Hall helped complete a sociological survey based on initial interviews Carnes had done in the upper Missouri River Basin. 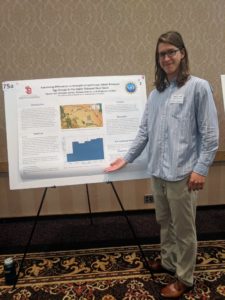 They were looking for what individuals valued about the landscape and where they have those values. Then they completed a survey, went door to door in towns of the upper Missouri River Basin.

Hall said his biggest take away was seeing the lack of diversity in Eastern South Dakota and Southern North Dakota.

“My big takeaways were there is not a whole lot of diversity in the upper Missouri River Basin. There’s a lot of Caucasian older people,” Hall said. “They don’t all have the same worldview and set of values.”

Lochlan Broadley, junior sports management major worked as an operations intern for the soccer team Charleston Battery. Broadley was able to achieve this internship after hearing about the opportunity from his father who works in youth development for the team. Bradley was interviewed for the position and would then go on to work for the professional team. 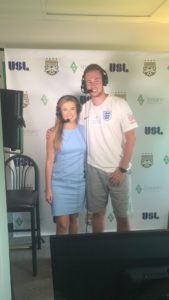 Lochlan Broadley, poses for a photo as he works during his internship. Submitted Photo / The Volante

Broadley’s main responsibilities consisted of talking to the other operations managers from the other teams and connecting to make sure that hotel, practices, and game-day management goals were all set and ready to go.

Broadley said making connections during his internship was something that was the most memorable to him.

“We (played) the Pittsburgh Riverhounds at our place and the assistant coach is Christian Pulisic dad and he’s like America’s top soccer player young star. So just kind-of honestly talking and connecting with him.”

Alyssa Collett, junior musical theatre major attended the Open Jar Institute in New York City this summer. She heard about the opportunity through the Kennedy Center American Collegiate Theatre Festival where she auditioned and received an email that said she was accepted into the program.

During the week-long program, selected students from around the country could take workshops with Broadway stars, directors, choreographers and more.

After the workshops would conclude for the day the students would see a Broadway production and reflect on what they learned from the day’s activities.

Collett said that something she found that was interesting was how auditions take place in New York. 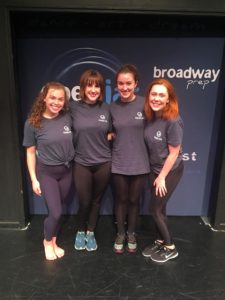 “A lot of things that I was taking away that I haven’t heard from USD was about the audio style,” Collett said. “At USD before you go to an audition room and before you start singing or doing your monologue you have to slate… whereas in New York you don’t have to slate at all. You walk in the room, you talk to your accompanist and you go in the middle of the room and you start singing.”

Skunk worked with the director of enrollment and the assistant director of economic development to find job opportunities for community members of the tribe or providing tribal members with resources to find a job. In the enrollment department, Skunk worked to get more people enrolled in the tribe.

Skunk said what he enjoyed about the experience was seeing how the office operated.

“It (made me) open my eyes and see how things actually operated because I had a basic understanding of the enrollment department and what they did, but working there and actually seeing what it takes to run the office and what it takes to get enrolled (was interesting),” Skunk said.

Sean Langner, recent graduate as an exercise science major, interned this summer at the Yale University Sports Performance Center as their strength and conditioning intern. 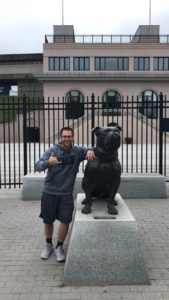 Sean Langner, takes a photo with the Yale mascot . Submitted Photo / The Volante

Langner worked on the fourth floor where there was an athlete gym and a non-athlete gym. He worked with all different types of athletes, especially on the football team and the lacrosse team where Langner worked with the athletes one on one. He also gained skills in data analytics and data auditing.

Langner said during his time at Yale University, he enjoyed working with athletes of diverse backgrounds.

“I’m working with kids who fly in on their dad’s private jet and then I’m also working with kids right next to him who could be the one kid from Haiti that lives in a shack or the other kid from Louisiana who lives in a one bedroom house with seven other siblings,” Langner said. “It’s such a diverse group.”