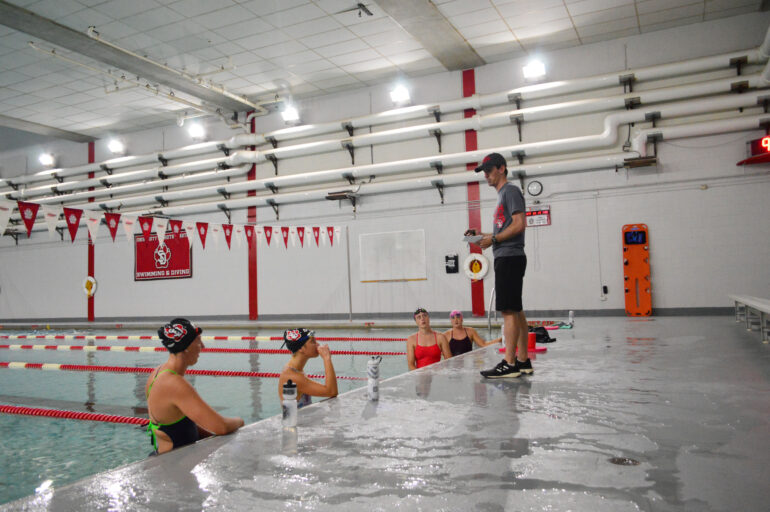 USD women’s triathlon team hopes to make an impression on their competitors by showing they are a strong team during their inaugural season.

Last November, USD announced they would add women’s triathlon to the list of sanctioned sports, and Kyle Joplin was brought on as head coach in January. From there, he began recruiting athletes.

“Payton (Ryz) and Leah (Drengenberg) had filled out a recruitment form. So, I started reaching out to those people with recruitment forms first,” Joplin said. “Sammy was working with a recruiting agent that helps international kids get to the U.S. and her recruiter reached out to me.”

The freshmen athletes said they chose triathlon at USD because of coach Kyle Joplin and the atmosphere on campus.

“When I was on my tour it just felt right, so I went with my heart,” Ryz said.

Whitting said she had never even been to America or visited other schools but felt comfortable inside USD’s athletic department.

“It doesn’t matter what sport team you’re on; everyone encourages each other,” Whitting said.

“I like how Vermillion is a small town, but the school feels big. Yet your teachers still know you by name and you know people walking around campus,” Benes said.

Benes and Juffer both competed in other sports at USD as undergraduates. Benes ran track and cross country, and Juffer swam. The rest competed on club triathlon teams throughout high school.

“There was a club team in Chicago which is near where I lived,” Drengenberg said. “So in the winter I would focus more on my swimming, then I would do track in the spring and the summer. That’s when I really focused on triathlon.”

Ryz said she competed on a provincial team that competed across Canada where she would practice 18-23 hours each week.

“It was very competitive, it wasn’t just a for fun team,” Ryz said. “We put in a lot of hours and it was a lot of hard work.”

Joplin said a shortened graduation timeline attracts student-athletes to continue their education in the States.

“Most Canadian schools take six or seven years to finish a bachelor’s degree with their training full-time,” Joplin said. “I think one thing that drew Payton (Ryz) to USD was that she would be able to finish her degree in four years while getting to do triathlon.”

The women’s triathlon team practices twenty hours each week. The team said they find it almost easier to keep up on their school work because they have to manage their time and get things done promptly.

“For me I know when I have time to get things done so I just have to sit down and do it,” Drengenberg said.

The triathlon team will compete throughout the season and have two qualifiers to make it to nationals in November at Arizona State University.

There are 25 varsity triathlon teams this year, but the team said ASU is their biggest competition this year.

“Arizona State is the best team right now,” Drengenberg said. “They have won nationals two years in a row, so we are hoping to scare them a little bit.”

The team will compete at the Augustana Twilight meet on Aug 31.