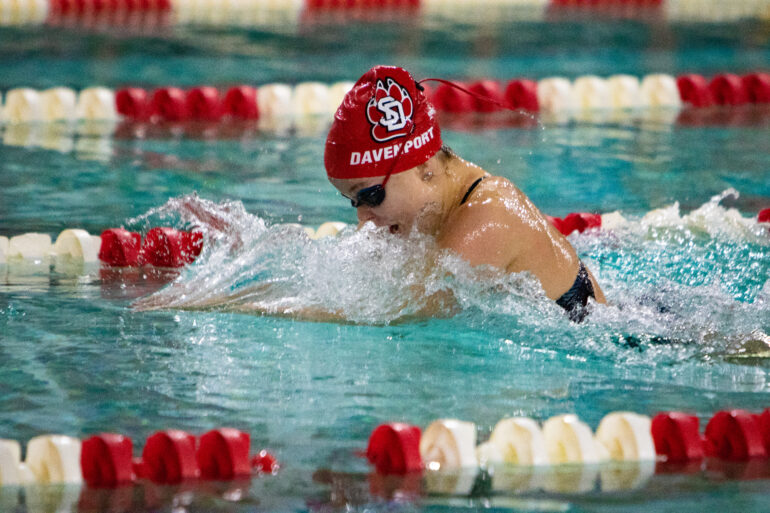 Sports
Isabelle Davenport swims the breaststroke in a meet earlier this month. Peyton Beyers | The Volante

The Coyotes hosted South Dakota State on Saturday and claimed final victories in both men’s (163-137) and women’s (213-83) flights.

“SDSU has been a ton of fun to compete against since freshman year,” said senior swim captain Chris Pospisil. “It sounds weird but it’s nice to see the competitors looking good because having a big competitive meet is always fun with SDSU.”

USD had a long and victorious evening, claiming wins in 25 of the 32 events throughout the four-hour meet. USD won all 16 events on the women’s side, meanwhile, the men won nine. Seven school records were broken in the process.

The Coyotes started off great as they posted victories in the first five events before losing in the men’s 200m free.

Freshman Jacob Won finished first place in three individual events including the 200m fly, 400 IM, and achieving a school record in the 400 free with a time of 4:07.29

Freshman Isabelle Davenport and senior Taylor Kidd won two events each for the women’s team. Davenport won the 100 and 200 breaststroke, while Kidd the 200 and 400 free.

Freshman Maddie Lavin took down her own school record in the 200 butterfly with a time of 2:21.21. The time is also a DakotaDome Pool record. Junior Sabrina Sabadeanu joined in on the record-breaking day with a time of 1:03.74 in the 100 backstroke.

Two relay teams also broke school records for the women. Sabadeanu, joined by Lavin, Davenport and junior Katie Coleman, broke the 400 medley record they had set last weekend against Omaha. Coleman and Kidd were joined by senior Hannah Gupton and freshman Meghan Atwell to break the 200 free relay with a time of 1:49.35.

Many USD students would agree that whenever SDSU comes to town, there is bound to be excitement.

“SDSU is always more hyped and there’s always more people at these meets when there usually isn’t at many others, so I loved the supportive atmosphere,” said freshman diver Naomi Bingham.

USD will host teams at the Coyote Invitational next weekend in Sioux Falls, S.D. in seasonal play before competing in the Summit League tournament.