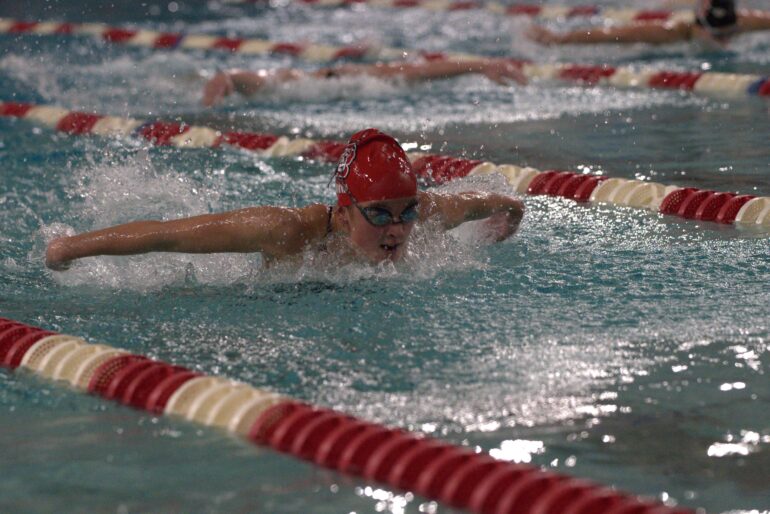 Maddie Lavin is a freshman biology major from Vermillion, SD. Lavin competes on the cross country, swim and track teams.

Austin Lammers: What is it like going to college in the town you were raised?

Maddie Lavin: USD feels a lot different than the Vermillion I grew up in. It’s kind of its own separate town within a town. I don’t go home very often but it’s nice to still have the community around. Like I can still go to Hy-Vee and I’ll still see someone I know.

AL: How did you get recruited to USD?

ML: I’ve known [head cross country coach Dan Fitzsimmons] for a while and [head swimming and diving coach Jason Mahowald]. His wife was actually my first swim coach ever. I honestly did not think I was gonna come here. But it’s so hard when they say ‘find a place like home’, and Vermillion is that home.

AL: What is it like being a three-sport athlete?

ML: I went from cross season straight into swimming season and then I’ll go straight into outdoor season. So there’s not really a break. It was so hard not to come here when I knew the coaches are so good and so willing to work with me. It’s something I wouldn’t be able to do anywhere else.

AL: As a freshman at USD, did you have to play ambassador to your teammates?

ML: My roommates especially, I was like “this where everything is.” But on teams I really tried to not overstep because I’ve grown up here my whole life, I know a lot about Vermillion, and I provide that information when needed, but the seniors know the ropes.