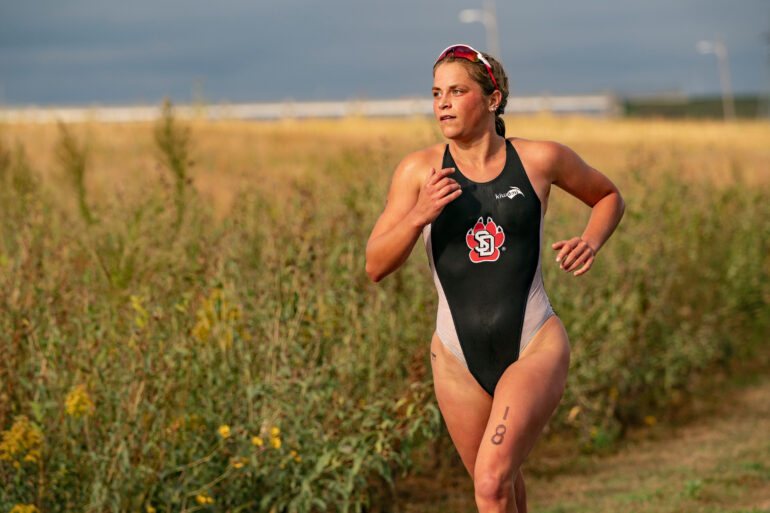 Sophomore Leah Drengenberg led the Coyotes to a second-place finish at the USA Triathlon Collegiate National Championships in Tempe, Arizona on Saturday. In the process, she became the university’s first All-American triathlete.

Drengenberg crossed the finish line in one hour, seven minutes and 21 seconds to secure a spot on the podium in third place, finishing behind Kyla Roy and Audrey Ernst of Arizona State.

“I honestly couldn’t believe it when I first finished,” Drengenberg said. “When I crossed and everyone was telling me ‘third place’ and ‘podium spot,’ I was so excited. I was happy for me and I was happy for the team. It was an awesome realization.”

This is the second time in two years of existence USD’s triathlon team has finished runner-up at the national championships. They finished with 18 points, only falling to Arizona State who scored eight.

“Bringing in so many freshmen, we weren’t sure how it was all going to work,” Drengenberg said. “We all get along so great and I think that’s part of it. We’re a family and we’re all able to work together so well and push each other.”

The Coyotes had seven top-20 placers, five of which finished in the top-10.

Following Drengenberg, freshman Ella Kubas placed seventh in her first national meet, clocking in at 1:08:26. Sophomores Sammy Whitting and Payton Ryz took eighth and ninth place, finishing in 1:09:08 and 1:09:32 respectively. Freshman Cass Dalbec secured 10th place by finishing the course in 1:10:16. Rounding out the top 20 were the freshman pair of Maddie Katz and Teagan Shapansky. Katz took 16th with a 1:10:46 finish while Shapansky clocked 1:12:05 for 19th place.

Drengenberg said she is excited about the future of the program.

“I think we can definitely snatch a national championship within the next two years,” She said. “We have two big recruits coming in next year that are going to bring more top places to the team.”

The meet concludes the second season of triathlon at USD.