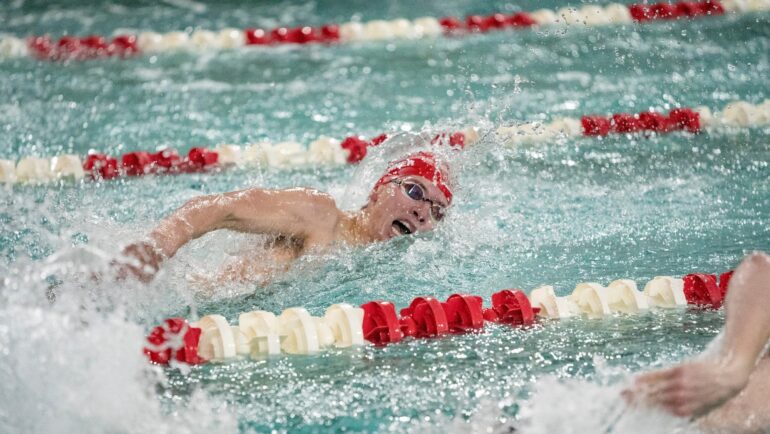 As a freshman, Jake Leichner played a vital role in the second place Summit League Coyote men’s’ swimming team, but his role with the team is starting to grow as an upperclassman.

“I think it always comes with my wanting to improve the team and just improve on my times,” Leichner said. “I’ve only got so many years left of swimming. I’m just trying to get the most out of it and trying to try and improve.”

Leichner is a business major from Highlands Ranch, Colorado.

In his sophomore campaign, Leichner lowered his record in the 100 individual medley at the Augie Invite this fall. In the same meet, Leichner anchored a 400 free relay team that lowered the school record.

In a dual with South Dakota State, Leichner won three events to lead the men’s team.

Leichner was awarded his first Summit League male swimmer of the week award in February for his performance in the dual against SDSU.

Leichner’s accolades as a sophomore have come from the hard work he always puts in, head swimming coach Jason Mahowald said.

“He’s a workhorse,” Mahowald said. “My assistant coaches and I say all the time that we have a hard time breaking the kid down because he just works so hard. Those records and his performance are all products of the work that he puts in, day in and day out, in the pool and the weight room.”

“My goals coming into this year were just to help my team get to places they’ve never been before,” Leichner said. “So far we’ve been going there. We’ve been places that we’ve never experienced. We’ve probably been the best we ever have been.”

As Leichner approaches the halfway point in his career, his plans for the rest of his time at USD are also about the team and how he can be a leader.