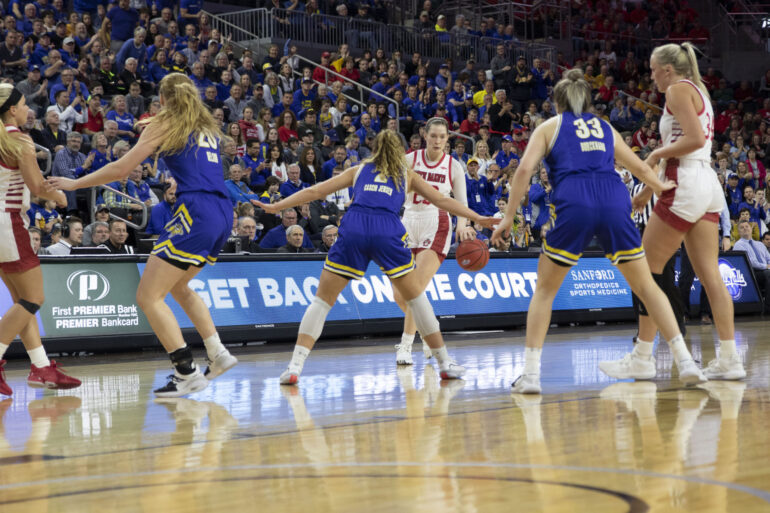 Championship Tuesday (March 10) was one to remember for the No. 17/11 Coyotes, who took down rival SDSU to win the Summit League title and complete a perfect 19-0 conference slate.

“It’s a season that I know my teammates, coaches and Coyote fans will never forget,” junior Chloe Lamb said in an email interview with The Volante. “The what-ifs are endless, but the things that we accomplished and the way we did it will always be remembered.”

The celebration lasted until the following day when the news began to spread. The NCAA decided very few select fans would be allowed at the NCAA Tournament in the coming weeks due to COVID-19.

By the time teams had time to settle with that news, more devastating news was announced. On Thursday, March 12, The NCAA canceled its national basketball tournaments.

“It was a shock,” USD head coach Dawn Plitzuweit said. “It was a shock to our team and to the nation to not have the NCAA Tournament.”

The hope for many, including Lamb, was the NCAA Tournament would be postponed until later in the spring or early summer months where it could be potentially played without issues from the COVID-19 outbreak.

“Before the news had come out, I had hoped they could just postpone it until the summer or until things got closer to normal,” Lamb said. “There were lots of texts sent between my teammates and our coaches just wondering what this meant and where we go from here. It was very saddening.”

The lack of tournament also means Coyote fans have seen the last of Madison McKeever, Taylor Frederick, Megan Bonar and Ciara Duffy. The four seniors have been a part of a great four-year stretch, which includes two regular-season undefeated conference records, a Summit League title, earning a national ranking and qualifying for two NCAA Tournaments.

“I feel so so terrible that they weren’t able to finish their career in the NCAA tournament,” Lamb said, “It comforts me knowing that they finished getting to cut the nets down in Sioux Falls and hoisting the championship trophy at the Summit League Tournament for the first time in their careers.”

Plitzuweit said what the seniors have done off the court is special as well. They have created excitement with the young girls in the area as well as the fanbase as a whole. Plitzuweit also said they are great students and support other student-athletes extremely well.

Going forward, the Coyote women are currently all at their respective homes awaiting the cool down of the virus. The future is uncertain at this point as the team typically holds summer workouts starting in June, but they are currently unable to get together.

The team did hold a video conference together Tuesday to catch up and chat. It’s the first time since the news broke out the team has been able to get together as a whole, Lamb said.

Despite all the negatives of the situation, Lamb said the team is staying fairly positive.

“I think we have all done a pretty good job of seeing the positives that the season held – finishing the conference undefeated, tournament champs, cutting the nets down, remembering all of the experiences we had throughout the year up until that point made us feel a little better,” Lamb said.

While the Coyote seniors may not get a chance at another NCAA Tournament run, Lamb said the rest of the team is looking forward to the opportunity to make another run at the tournament next season.

“One thing that might serve as extra motivation is just the fact that we didn’t get to experience the NCAA tournament this year even though we felt like we did everything we could to earn that,” Lamb said. “This will motivate us to do the same thing next year and do our best to make sure no one can take that away from us.”