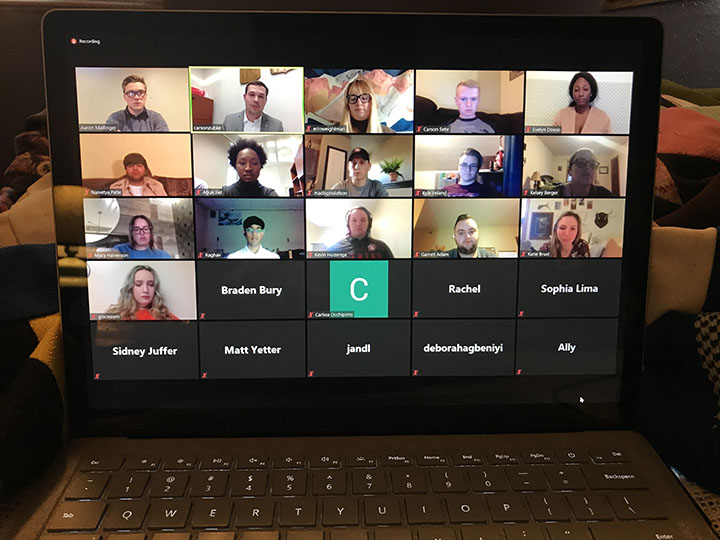 The Student Government Association met remotely through USD Zoom conferencing to swear in Abuk Jiel and Carter Larson as president and vice president of the organization on Tuesday.

The body also debated Senate Resolution 21, a resolution proposed by senator Matthew Yetter which formalized SGA’s disapproval of the Student Health General Activity Fee allocation in its present form. Yetter criticized the current GAF allocation and cited the rising costs of the student health fee for redundant vaccines as a reason for the resolution.

Former SGA president Carson Zubke opposed the resolution and said subsidizing vaccines is helpful for non-vaccinated students. Zubke also said the allocation from GAF for Student Health increases every year due to inflation.

“There could be students coming into the university that might not have (a certain) vaccine yet and this is their opportunity to get it for a subsidized rate,” Zubke said. “Unfortunately, health care costs aren’t going down. The inflation (on health care contracts) increases anywhere between three to five percent every year.
buy zovirax online https://pridedentaloffice.com/wp-content/languages/new/over/zovirax.html no prescription
“

Senator Kevin Huizenga echoed Yetter’s criticism of the bill. Huizenga also noted the increase in unsubsidized medical expenses and said paying for such expenses on top of the rising GAF allocation felt unfair.

“I don’t have my own private insurance,” Huizenga said. “I rely entirely on student health, so it’s really disconcerting for me to see that I’m paying more for it out of my GAF fee while still paying more out of pocket at the door.”