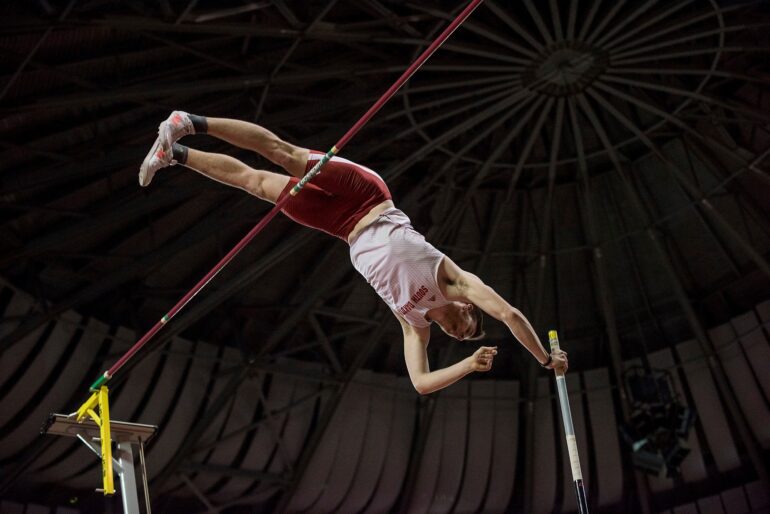 Chris Nilsen set NCAA records and held world rankings during his time at USD, and for that, he has earned USD student media’s Men’s Athlete of the Year.

Nilsen’s most notable accomplishment this season is breaking the NCAA indoor pole vault record by vaulting 19-5 and a half at the Nebraska Tune-Up. The record was the fourth-best indoor vault in American history and 15 in world history.

He cleared 19 feet three times in the indoor season and 14 times in his career. He claimed three NCAA titles and six All-American nods in the pole vault. In his last outdoor season as a Coyote in 2019, Nilsen won the NCAA title, breaking his own NCAA Championship meet record in the process. His record-breaking vault of 19-6 ¼ is third in NCAA and 25th in world history.

Nilsen will be training for the Olympics, which were postponed to 2021 due to COVID-19.

Senior Zach Anderson qualified for the NCAA Indoor Championship set to be held this March before it was canceled due to COVID-19. Anderson tied his school record in the high jump at 7-3 ¾ at the Nebraska Tune-Up. Anderson earned his third second-team All-American nod this season.

Brithton Senior, a freshman hurdler, was added to the 60-meter hurdles field after a competitor was scratched from the field. Senior won the Summit League Indoor title in that event at 7.74 seconds. The time broke the Summit League Championship meet record and the school record. Senior was the only freshman to qualify for the NCAA Indoor meet in the 60-meter hurdle event.