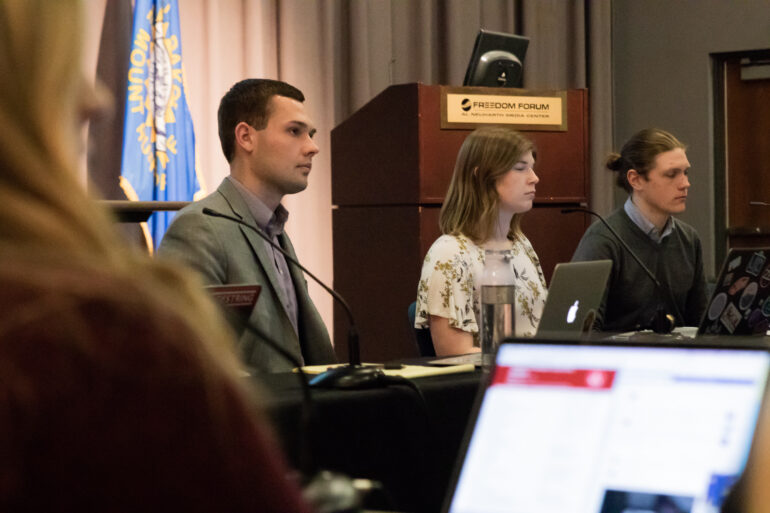 While Zubke and Booth saw the creation of Charlie’s Cupboard and the approval of an SGA donation to the Patriots Plaza throughout their term, they said learned quickly not every project is easy.

One of the first goals Zubke and Booth pursued was making college transcripts free for students.

“We didn’t realize how many people and things that actually took to get that done, so that ended up not actually happening, but we did try and work on it at the beginning of our term,” Booth said.

Throughout the year, Booth said, she learned to not get discouraged by setbacks.

“Don’t be so hard on yourself,” Booth said. “The learning curve right away is definitely substantial and I guess going back now, I would tell myself that you need to take a lot more deep breaths.”

“Looking back, I really wish I would’ve told myself to take some more time just to have fun and enjoy the experience,” Zubke said.

Zubke also said the experience taught him about the power of a simple conversation.

“The first step should always be just to talk to somebody in administration or talk to a professor if you’re able to and something always happens from that,” Zubke said.

Conversation was a big part of Zubke and Booth’s campaign. They created Campus Leaders Mixers. These mixers are meetings which consist of SGA members and student organization leaders.

These events, Booth said, allow students to talk to SGA members without the intimidation of speaking at the Tuesday meetings. Student organizations have the opportunity to attend CLMs as opposed to a Tuesday SGA meeting if they choose to do so.

Zubke said he hopes these interactions can help shed some light on how SGA can help student organizations.

“People always see SGA as a governing body that meets on Tuesday nights and talks about policy and procedure, but it’s so much more than that to me,” Zubke said. “SGA has such a big opportunity to make an impact directly in the lives of students.”

“The communication between the students and SGA has changed and has gotten better and I think from here it will only get better,” Booth said.

For Zubke, friendliness was an important objective throughout his term.

“The importance of being kind, being engaged and being someone’s friend,” Zubke said. “Those are three things that are really important that I kept in my mind throughout the whole year.”

Booth said she grew as both a person and a leader from the experience. She said she worked with a variety of people and made a lot of relationships on-campus, but she said she’s excited for the future of SGA.

“I’m glad that I still get to be around next year as a senior to kind of see Abuk and Carter make SGA even better than how Carson and I left it,” Booth said. “Onward to the future.”