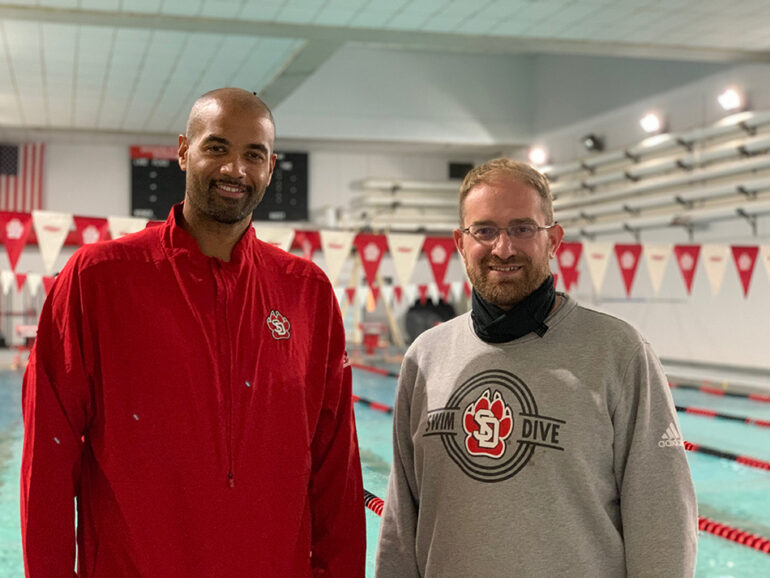 Campus
"We swam together in college, swam for the same team, graduated the same year and actually had our first coaching opportunities together." The Volante | Rachel Thompson

Harris returned to USD as associate coach for the Coyotes swim and dive team. After a stint three year stint in Arkansas and a five year stay at North Dakota, Harris is back to where his coaching career began, South Dakota.

Head coach Mahowald and Harris met each other in college. They swam together at the University of Wisconsin-Stevens Point on the same team and ended up coaching together for the first time as undergraduates.

“We swam together in college, swam for the same team, graduated the same year and actually had our first coaching opportunities together. As we were finishing up our undergraduate degrees at Stevens Point, Wisconsin,” Harris said.

After completing their undergraduates they went their separate ways towards Grad school; Mahowald to Ball State University and Harris to St. Cloud State University. They kept in touch on their careers.

After graduate school, Mahowald got an opportunity to coach at USD and asked Harris to join him on the Coyotes staff. They coached together for the Coyotes for six years from 2005-2011. 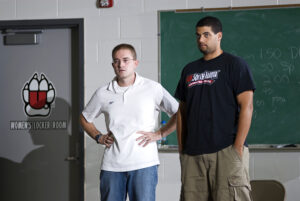 Mahowald stayed at USD and Harris went off to the University of Arkansas. Harris was an associate coach for three seasons in Arkansas.

“Anthony is somebody that I encouraged to apply for the position and through the process. He definitely rose to the top as the best person for the job without question,” Mahowald said.

After coming back to USD the dynamic of the swim team changed for the better.

“With Jason, it’s been very easy to fall back into our routine,” Harris said. “You know, we know each other so well in and out of the pool. The things that we do on the pool deck still, even though time has passed, nine years have passed since we’ve coached together before. It’s kind of like we’ve just gotten back up on the bike and we have a routine.”

Harris returned to USD this year. Since then he has made an impact on the team for the better.

“I have noticed a change in dynamics since Anthony joined our team. He brings a certain energy that I think our team lacked before, and as a result, we are all motivated and excited to get after it this season,” junior Isabel Fairbanks said.

Mahowald and Harris have opposite coaching styles. Mahowald focuses on the big picture and Harris likes to get the little details right.

“I would almost describe them as opposites, but in the best way,” Fairbanks said.

Team spirit is what makes the scores, the wins, the connection between players. What makes the team spirit is the environment they are in that is created by the coaches. USD’s swim team coaches have a strong bond and dynamic. They understand each other’s coaching styles and they balance each other out.

“I think I obviously I think Jason and I complement each other really well. You know, the way that we interact I think is contagious and the athletes kind of feed off of that,” Harris said.

The coaches are excited about this season, they are looking forward to when the students-athletes will get to compete again, Mahowald said.

“I’m coaching with one of my best friends again,” Harris said.

The Coyotes annual inter-squad Red vs White meet is Saturday, Sept. 26 inside the DakotaDome pool.

May 10th, 2022135
This is the ninth and final installment of a series recording the experiences of students and faculty...
Sports

Apr 25th, 202243
Sophomore health sciences major Stella Fairbanks had a productive diving season after she was named the...