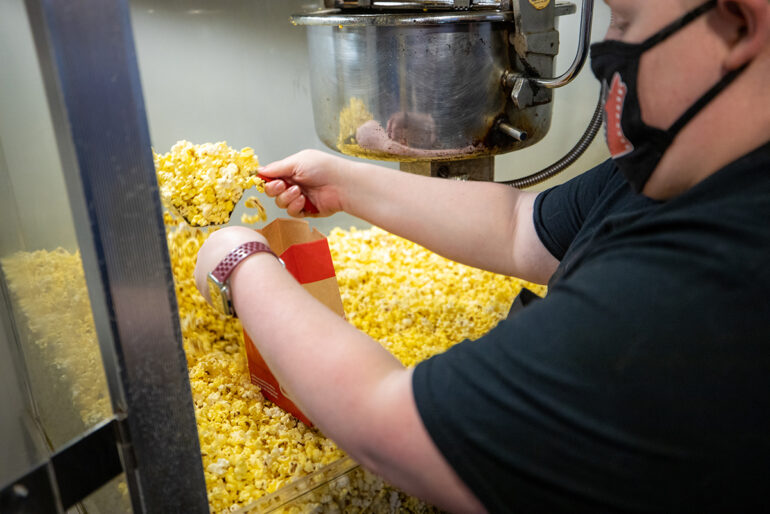 Though the effects of the global pandemic are still prevalent, one Vermillion business is bringing back a sense of normalcy through a favorite American pastime: movies.

Shannon Cole, executive director of Vermillion Theaters, said it was hard to close the theater knowing they were going to miss their biggest season.

“We skipped an entire blockbuster season, our busiest time of year, and that’s been financially very hard and very scary,” Cole said.

A blockbuster season — for any theater usually occurs in the summer months where major motion pictures come to the screen. Most of the movies are highly anticipated throughout the year, drawing in a larger crowd.

During their time closed, Vermillion Theaters began to open their doors a few times during the week to sell popcorn to community members.

“We got a lot of support, and it was fun to feel normal for a few hours a week,” Cole said.

Since the success of their popcorn sales, the Coyote Twin continues to sell popcorn all week to anyone who needs a salty snack.

With many theaters in America making a slow comeback, Coyote Twin is opening back up headfirst, Cole said, with safety in mind.

The theater has decreased occupancy to 25%, installed plexiglass and hand sanitizer stations, blocked off certain rows in their theaters and instated a mask-wearing policy.

“We’re following the national standards for theater operations called CinemaSafe as well as the guidelines in Vermillion,” Cole said.

As stated on their website, CinemaSafe is a program promoting protocols and guidelines which are supported by leading epidemiologists to support a safe return to movie .

Cole said they plan to stay open as long as they can provide a safe experience for students and community members.

“We can’t control the decisions Hollywood makes, but we can control our health protocols and how good of a neighbor we are and we hope that will bring folks back to us over time,” Cole said.

“Every week, I sit in on a webinar with the National Organization of Theatre Owners and get the fresh-off-the-phone-call updates on what titles are moving or holding to help us plan,” Cole said.

Since many movie productions have been halted from release, Coyote Twin is looking back on some blockbuster throwbacks to bring in the community.

Recently, the theater showed Jurassic Park, Back to the Future and Mad Max: Fury Road, just to name a few.

“We’re always making a calculation about which movies might entice Vermillion residents the most and what crowd we’re going to aim for,” Cole said.

Brody Stone, Coyote Twin employee, said the older movies bring in moviegoers who are looking to experience a favorite film.

“We run with what we have and (the throwback movies) bring in a new, excited crowd,” Stone said.

Which movies the theater can show or not are controlled by the studios who produced the movies and can be pulled at any time.

“We had Black Panther booked weeks ahead of time for September, and Disney pulled the movie from all cinemas after the news of Chadwick Boseman’s passing,” Cole said.

Cole said she is looking to forward to reopening the First Dakota Coyote Gallery soon. The gallery is attached to the .

“We’re hoping to reintroduce some art to our gallery this fall, which movie patons and visitors will be able to enjoy during our weekend hours,” Cole said.

For now, the Coyote Twin encourages USD students to look for opportunities the theater may hold for them.

Cole said the theater hopes to build back up to a holiday or summer blockbuster season in 2021, but ensures safety is most important.

Movies are free to USD students every Friday and Saturday nights. To find out more about movies and showtimes, go to the Vermillion Theaters website.