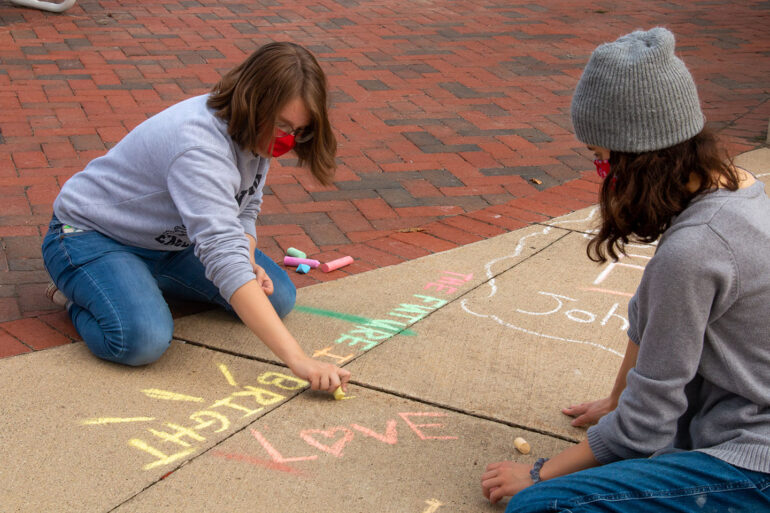 Campus
Community members decorated sidewalks along main street with messages honoring first-responders on 9/11 and healthcare workers in the pandemic. Miles Amende | The Volante

The Gallagher Center hosted its first “Chalk the Walk” event at the Platz in downtown Vermillion to commemorate the Sept. 11 terrorist attacks in 2001.

In addition to honoring the first-responders on 9/11, event leader Kim Albracht said she wanted to call attention to Vermillion’s current efforts in responding to the COVID-19 pandemic.

People’s understanding of 9/11, Albrach said, has morphed into a recognition that communities are stronger when everyone works together. She said the pandemic has only reiterated this idea.

“We decided we would make this year’s day of service more about thanking the community,” Albracht said. “We thought it would be a great time for us to come out here, say thank you to essential workers, to people that have done things for Vermillion during this time.”

The event was originally planned to take place on Sept. 11 but was rescheduled to Sept. 12 due to weather concerns.

Albracht said the Gallagher Center chose to host a “Chalk the Walk” because it allowed them to host an activity and social distance.

Each part of the sidewalk was overseen by a site leader—a volunteer who provided both chalk and inspiration to attendees. Madalyn Bollig, a site leader and graduate student, said it’s important to remember both the current first-responders and those who lost their lives on 9/11.

“This (event) is a way we can get out into the community and creatively remind people of that,” Bollig said.

Another site leader, Benjamin Fink, said he wanted the event to get the community involved in commemorating the attacks.

“I hope we get people to see that we’re out here doing it, and maybe other people can tag along and help remember a very special day in our history,” Fink said.

Both the pandemic and the attacks, Albracht said, show the importance of community resilience. She said that is why it is important not to forget the Sept. 11 attacks even though they happened 19 years ago.

“(For) people that were either not alive or are too young to remember it, it certainly can be hard to relate, but the message of that resilience is as important today as it was (19) years ago,” Albracht said. “It is our responsibility to keep talking about this and working together as communities.”