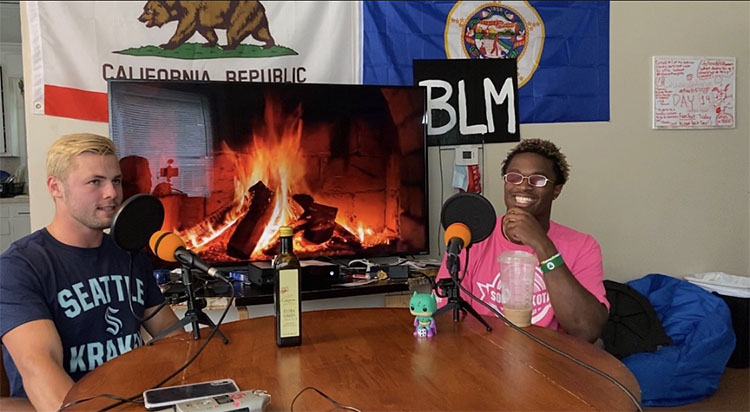 Two members of the South Dakota football team recently came together to create a podcast. Hosted by Caleb Vander Esch and Dakota Smith, 1328 is a creative outlet for them to discuss topics larger than sports.

The first episode of the podcast, the California natives aired Sept. 5 and continue to release new episodes every Tuesday on every streaming service.

The show originated off of Vander Esch’s own podcast he previously solo hosted called D.C.R. with Caleb Vander Esch. Where he did one on one interviews with people like President Sheila Gestring and former Coyote quarterback Chris Streveler.

“We had a couple conversations and felt like we could do this and just started recording. The most basic premise that we bounced around is taking athletes, whether college or professional level and getting to know them outside of sports,” Smith said.

The housemates plan on finding out their podcast guest’s basic opinions, beliefs and stories during the show.

The first three episodes of 1328 focus on the hosts themselves and talking through their own stories and how they are more than just athletes.

The title 1328 originated the morning of the first episode, after they had picked a previous name for it, Smith said.

“That morning I was in the shower and heard a song with a bunch of numbers and I really liked the way four numbers together sounded,” Smith said. “Then I was thinking what four numbers should we use then it was 13 which is (Vander Esch’s) number and then 28 which is mine.”

The production process for 1328, Vander Esch said, includes the two hosts and a table in the living room.

“We had to go buy some chairs for the table and we have mics on the table and our TV is right behind us,” Vander Esch said. “We have to tell our roommates to just be quiet when we’re recording.”

Vander Esch then takes the raw sound and masters it into an audio program. The two said they plan on doing some outside videography to include with the podcast content as well.

“We just use the 50 minue conversations straight. We also are going to start filming them and creating youtube videos to go along with it,” Smith said.

The show is continuing to grow and is described by the pair as a work in progress.

“We want to start reaching out to people we know to be on the show. We want to not only reach out to college athletes locally, but reach out to some professional athletes we’re both friends with,” Smith said. “We just want to get to know them and their opinions on some things.”

The process of how their show is set up is very abstract, Smith said.

“(Vander Esch) might write some things in his notes, but I just like to think about things through the week and be like okay, if I remember it then I remember it and if I don’t then it wasn’t meant to be,” Smith said.

Vander Esch said having no plan is the best plan because the episodes are as genuine and raw as they can be.

“People will ask us before we record an episode about what we’re going to talk about, and we honestly don’t have an answer, I really don’t know,” Vander Esch said. “It just kinda comes out with a random shower thought.”

One of the recurring segments on 1328 is shower thoughts, where they think of a random thought and go from there, Vander Esch said.

The pair said they wanted to take their ideas to a podcast to have a truly intimate conversation with people. They want their show to be more than a podcast by making vlogs to create an experience.