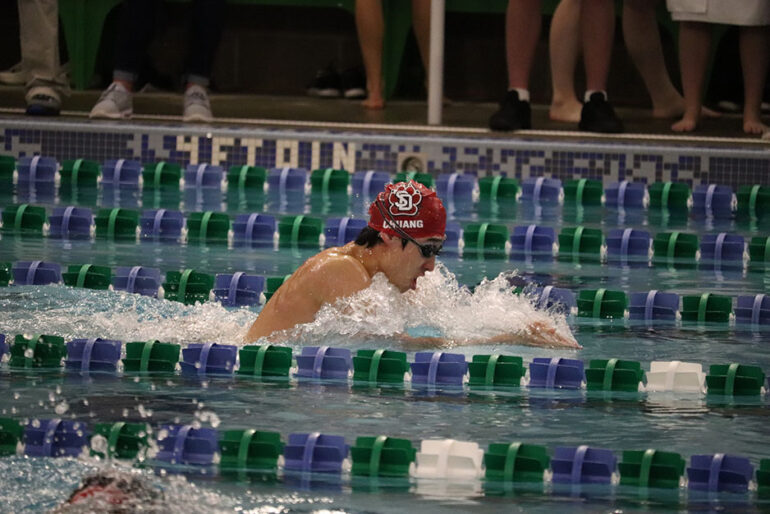 USD is home to more than 400 student athletes. Twenty-seven of those athletes’ hometowns are not in the United States but rather from countries all around the world.

Indy Ampaw, a sophomore for the Coyotes’ women’s tennis team, originally from London, United Kingdom, and Elbert Chuang, a senior on USD’s men’s swimming and diving team from Richmond Hill, Toronto, said being an international student-athlete at USD has been a great experience.

“I’ve loved it here so far,” Ampaw said. “Everyone is so nice and friendly. When I first arrived here everyone was so welcoming and wanted to be your friend.”

Similarly, Chuang found the same type of friendliness when he first arrived in Vermillion. From always seeing someone he knows in Walmart or everyone saying hello as they walk by and people opening doors for others — Chuang finds simple and kind efforts like these make a small town like Vermillion desirable.

“It doesn’t matter who I run into here, everyone says hi and is always so friendly here,” Chuang said. “When I’m back home, you don’t really find that there.”

However, Ampaw said, moving to a new country doesn’t come without its new and sometimes weird experiences compared to their own country.

“The first day I got here I heard someone say ‘Howdy’ and I was shocked because I thought that was something Americans just say in the old school movies,” Ampaw said. “(America) has so much food here and it’s not as good as back home. It feels a lot more processed and not as healthy.”

Alternatively, Chuang said food in Vermillion compared to his hometown near Toronto tastes pretty much the same with few minor differences.

“In Canada the food is pretty similar but I would say in Canada there is a little bit more variety,” Chuang said. “There are a lot of local places I really appreciate when I get to eat here. My favorite place to go to is Mr. Smith’s.”

The most significant difference for many student athletes’ homeland compared to Vermillion, Chaung said, is the weather during the winter.

“The biggest change for me is the weather,” Chuang said. “People would think because I’m from Canada I would be used to it but I think it gets a lot colder (in Vermillion) and it definitely took a while to get used to the first winter I was here.”

Ampaw, who is a transfer from a college in Alabama, has yet to spend a winter in Vermillion.

Vermillion’s winters, Ampaw said, is something she is preparing for.

“I have heard it gets down to -40 degrees and I have never experienced that,” Ampaw said. “I’m definitely getting mentally prepared for that and will probably be so bundled up during the winter.”

Ampaw and Chuang both said USD has created a great environment for them in their athletic and academic pursuits.

“Athletically and academically, USD lets me do what I love while getting a great education,” Chuang said. “The small class room size and personal relationships with professors has really been great and I definitely have loved being here.”